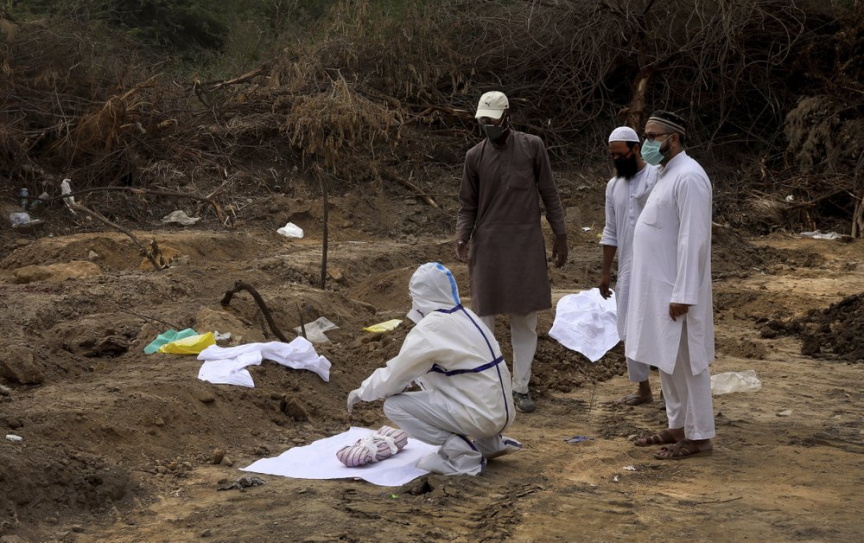 The body of a prematurely born one week old baby of a covid positive mother being prepared for burial at the designated burial spot for COVID 19 patients in New Delhi, India, Friday, June 5, 2020. (AP Photo/Manish Swarup)

There has been a surge in infections in rural areas following the return of hundreds of thousands of migrant workers who left cities and towns after losing their jobs due to a nationwide lockdown.

The more than 2-month-old lockdown is now largely being enforced only in high-risk areas, known as containment zones.

The government has partially restored train service and domestic flights and allowed the reopening of shops and manufacturing.

E-commerce companies have started to deliver goods, including those considered nonessential, to places outside containment zones.

Metro service and schools and colleges, however, remain shuttered nationwide.

AUSTRALIAN COURT RULES AGAINST PROTEST: An Australian court has sided with police in ruling Friday that a Black Lives Matter protest planned for Sydney poses too much risk of spreading the coronavirus. Thousands of people were expected to rally in Australia’s largest city on Saturday to honor George Floyd, who was killed by U.S. police, and to protest against indigenous Aboriginal deaths in custody. But the New South Wales state Supreme Court ruled that the rally was not an authorized public assembly. The judge said “we’re talking about a situation of a health crisis.”

— DUTERTE ANGERED BY AID DELAYS: President Rodrigo Duterte expressed relief that “Filipinos are really law-abiding” and that his country was not going through riots like America, which would make coronavirus quarantine enforcement formidable. Duterte made the remarks during a televised meeting Thursday night with key Cabinet officials, where he used expletives to express disgust over a range of quarantine problems. He particularly fumed over the delay in the delivery of promised financial help to the families of 32 health workers who died of COVID-19. Duterte wondered what was causing the problem, saying the Philippines wasn’t like the U.S., where “there is a riot going all over and it seems to be that there is no end in sight.” Duterte renewed his threat to jail officials who steal cash aid meant for the poor.

— SOUTH KOREA CASES CLIMB: South Korea on Friday reported 39 new cases of the coronavirus as infections continued to spike after rigid social distancing rules were relaxed. The Korea Centers for Disease Control and Prevention said 34 of the new cases were reported in the Seoul metropolitan area, where about half of South Korea’s 51 million people live. The rise in infections linked to Seoul nightclubs and a large e-commerce warehouse is still far below the hundreds of new cases that were reported daily in late February and early March.

— FIJI SAYS IT’S VIRUS FREE: Fiji has declared itself free of the coronavirus -- at least for now -- after all 18 people who tested positive recovered. Prime Minister Frank Bainimarama said Friday that the South Pacific island nation has just cleared the last of its active patients. “It’s now been 45 days since we recorded our last case. With no deaths, our recovery rate is 100%,” Bainimarama wrote on Twitter. “Answered prayers, hard work, and affirmation of science!” Fiji, which has a population of 900,000, instituted a lockdown in certain areas in April and imposed ongoing border restrictions.

— JAKARTA MOSQUES REOPEN: Muslims in Indonesia’s capital held their first communal Friday prayers as mosques closed by the coronavirus outbreak for nine weeks were allowed to start reopening as part of plans to relax restrictions. Jakarta Gov. Anies Baswedan allowed mosques and other worship facilities to open at half capacity. Fever checks, masks and social distancing were in place. Worshipers were asked to bring their own prayer rugs and avoid shaking hands with others. The government is deploying 340,000 security personnel to enforce health rules in an effort to get the country back to normal by the end of July amid growing economic pressure.

— FIVE NEW CASES IN CHINA: China on Friday reported five new confirmed coronavirus cases, all of them brought by Chinese citizens from outside the country. Despite criticism of its initial handling of the outbreak which was first detected in Wuhan last year and allegations it withheld crucial information, China has repeatedly defended its record. Foreign ministry spokesman Zhao Lijian said Thursday that Beijing was committed to providing support to the World Health Organization, GAVI Alliance and other international organizations to ensure that vaccines are accessible and affordable in developing countries. The GAVI Alliance seeks to provide children in the world’s poorest countries with improved access to new and underused vaccines. Also Thursday, Premier Li Keqiang urged members of an anti-virus task force to redouble efforts to develop a vaccine and effective medications for COVID-19.

— NEW MALAYSIAN STIMULUS: Malaysia announced a 35 billion ringgit ($8.2 billion) stimulus package to bolster short-term economic recovery as it emerges from a virus lockdown. The package, which is in addition to a $60 billion stimulus announced earlier, centers on increasing employment, attracting foreign investment and revitalizing key sectors of the economy. Prime Minister Muhyiddin Yassin said Friday it includes a 10 billion ringgit ($2.3 billion) injection into the economy in the form of wage subsidies, training programs and support for small and medium-size enterprises. Various tax breaks and rebates will help the manufacturing, property, auto, palm oil, airline and tourism sectors. He said this includes a zero tax rate for up to 15 years for foreigners investing more than 500 million ringgit ($117 million) in manufacturing and fixed property. Malaysia, which has nearly 8,300 confirmed infections and 116 deaths, eased virus restrictions last month and most economic sectors have reopened.

India has another biggest 1-day jump in cases