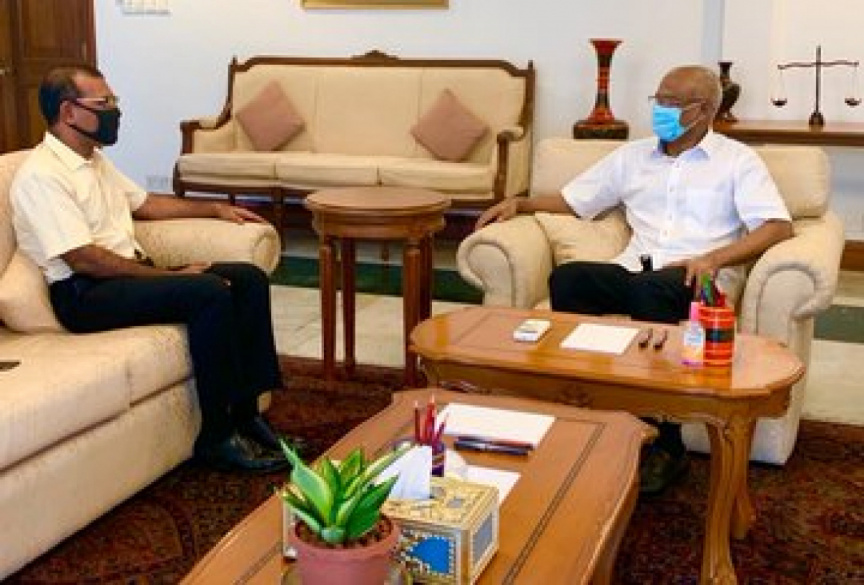 President Ibrahim Mohamed Solih (R) and Speaker of the Parliament Mohamed Nasheed (L) meeting at the Muliyaage on June 4, 2020.

President of the Maldives Ibrahim Mohamed Solih has met with the Speaker of the Parliament Mohamed Nasheed in the Presidential residence Muliyaage.

The two held discussions during the meeting, read a tweet by the President afterward.

Discussions were focused on areas of development that needed to be prioritized, read the tweet by the President who noted the importance of the Parliament as a partner in this. The President said that the two would work together for the benefit of the Maldivian citizens.

Had a very engaging discussion with Speaker of Majlis President @MohamedNasheed where we discussed priorities and areas of focus in our development agenda. The People’s Majlis is an important partner to achieve these goals and together we will work for all Maldivians. pic.twitter.com/54oEIP3fFc

Rumors have been circulating of a rift between the President and Speaker Nasheed who are long-term friends and close allies that come from the same party. Accusations of the Parliament impeding the operations of the executive power have often been directed.

However, the rumors were quashed by the two who have maintained that their close relationship is as strong as ever and that no circumstances that could lead to such a rift have occurred between them. They have repeatedly reassured their supporters of this.

Speaker Mohamed Nasheed is the leader of the governing MDP and is a former President.