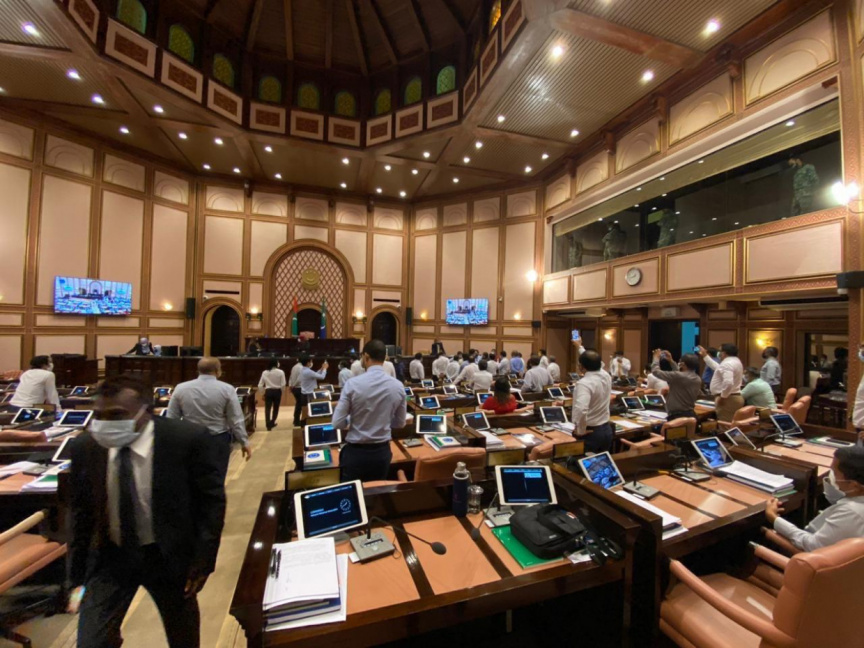 The ongoing pandemic situation of COVID-19 has left the majority of the country confined to their homes. Even for basic essential needs, civilians are not allowed to step outdoors without a permit. Violations of the measures are met with swift fines and even arrests.

They are stringent measures put in place by health authorities to effectively curb and control the spread of the virus which has so far resulted in the death of seven people.

However this morning, a different picture was observed in the legislative body of the country. MPs were involved in scuffles inside the parliament, breaking virtually every guideline issued by the Health Protection Agency (HPA) for parliament sessions.

Speaker of the Parliament, Mohamed Nasheed had ordered Naifaru MP and PPM deputy leader Ahmed Shiyam to be removed from the premises after causing a commotion. The MP had raised a point of order saying that the session underway went against the constitution.

Monday's late session that stretched into the early hours of Tuesday morning was held to conduct a very important task. Passing an amendment to the constitution to extend the terms of incumbent councilors before the country plunged into a legal vacuum came with time constraints. The bill was passed last night and ratified today by the President.

However, the commotion inside the parliament last night before the bill was passed, saw MP Shiyam forcefully removed from the premises by MPs belonging to the governing MDP. Only a few MPs were identified adhering to the social distance guidelines, while some MPs were brazen enough to remove their masks and get involved in the fracas.

Just as a reminder, let us go through the HPA guidelines issued for the legislature and the guidelines formed by the parliament for sessions. The parliament’s administration decided on six major steps to ensure the safety of MPs.

What was seen last night, was in stark contrast to the above guidelines. Even the Speaker Mohamed Nasheed was heard on video calling on MPs to remove MP Shiyam. “Everyone, get him out.” were the loosely translated words of the Speaker captured on video.

After this, HPA has been on the receiving end of criticism from the public. Many have alleged that there is discrimination and inequality when handing out punishments for violating health measures. The public is also very much annoyed by the actions of MPs inside the parliament.

There is a process for removing MPs. The Speaker calls the MP to leave 3 times, & @MNDF_Official removes them. @Abdulla_Shahid did it numerous times. But this was a mob brawl, unworthy of our legislature. It is shaming, and we deserve better. @mvpeoplesmajlis should do better. pic.twitter.com/m4tZAGfv2s

“They (MPs) have to be fined for violating social distancing rules. They have placed their families and many more into danger.” Said a Twitter user regarding the fracas.

Others have called out the bad example set out by the leader of the legislative body, which is a separate power of the state.

There were also calls to put an immediate stop to parliament sessions since last night’s events clearly showed that MPs would not adhere to the health guidelines and social distancing. They called for video conference sessions to be recommenced.

There is nothing that can be said regarding the public fallout from this. MPs are the lawmakers, and them not upholding the laws they create, sets a bad example. They are the figures to show the way in terms of upholding the law.

The next question that comes to the mind is whether MPs could be reprimanded for violating the guidelines.

The Director-General of Public Health was not available for a comment on the matter when contacted. HPA has also not issued any statements regarding the commotion, so the answer to that question remains unclear.

What is clear, is that MPs were in clear violation. It was broadcast on live TV and many of the public witnessed it. Nothing can be done or said otherwise. Laws in the country do not exclude MPs. So it is only natural for public sentiments to revolve around MPs to face consequences of breaking rules, just like any common member of the public.