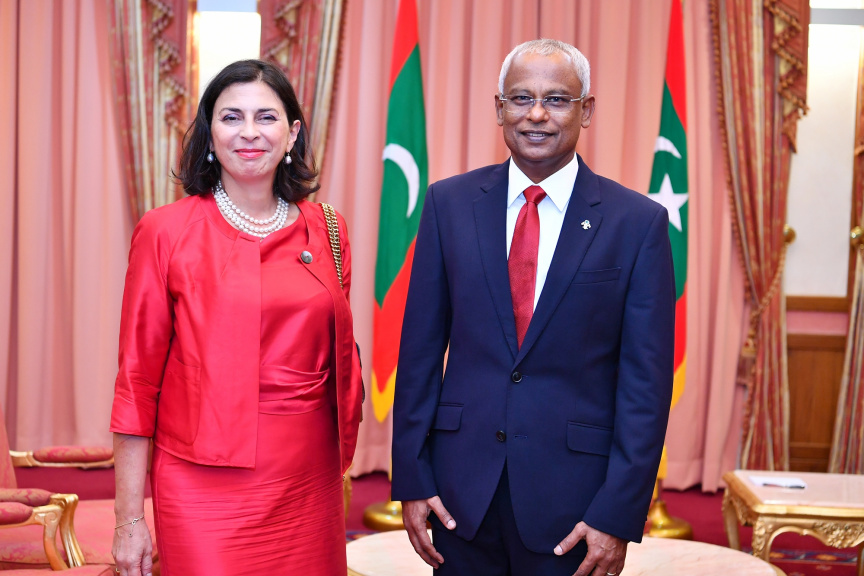 Maldives and Italy are historically close when it comes to bilateral relations since diplomatic relations were established in 1966. Strong ties are observed between the two countries in terms of tourism, health and infrastructure development.

Today, Italy celebrates the Festa della Repubblica or the National Day of Italy. In an interview with Sun Online International to celebrate the importance of the day and connection between the two countries, Ambassador of the Italian Republic to the Maldives, Her Excellency Rita Giuliana Mannella speaks about the close relations between the two countries and what the future holds for both nations.

"June 2 marks the National Day of Italy when we celebrate an important date in the history of my country. On this very day, in 1946, after a long and destructive war, Italians were able to come together to rebuild our country in a spirit of determination and hope, leading the country to a period of unprecedented growth and prosperity."

"Even today, 74 years on, June 2 is especially valued as a symbol of unity and national pride, bringing together Italian people at home and abroad." said the Ambassador regarding the massive significance of the day for Italy.

Italians have two main ideologies, said the Ambassador, which are Democracy and Peace. The two ideologies were very important to the nation after the tragedy of WW2 when the Italian Constituent Assembly, was faced with the duty to rebuild the institutional tissue of the nation.

"It is encased in what is our first law, the Constitution, the message of total repudiation of war as a mean to settle international disputes and the promotion of international cooperation, trough the membership in the multilateral institutions, European Integration and collective defense in NATO." said the Ambassador.

At the same time, one of the other key points for Italian national goals is the economic and social development of the country. As a democracy, there are, of course, differences of visions and values among people, said the Ambassador who added that it was practiced in full respect of human rights, rule of law and the rich cultural heritage of the country.

Regarding the current and future diplomatic ties between the two nations, Ambassador Mannella said that the Maldives is considered as the closest place to Eden by Italians.

"Our love with the Maldives goes back a long time when an adventurous group of Italians landed in the Maldives in the ’70s and, since then, the attraction for the Maldives has never left my fellow countrymen, who consider the Maldives the closest place to Eden,"

"Some time ago, reading an old travel magazine, I found an interview with Giorgio Corbin, the Italian who firstly contributed to the touristic development of the Archipelago. He arrived here with a Cargo ship in 1971 and immediately fell in love with your uncontaminated sea, with the color of the sky, and the white of the beaches. With the help of a local partner, he developed the first resort, the famous Kurumba. He started to invite the first group of Italian friend--the rest is well known!"

"Such a global success! In fact, we proudly claim to have been the first to recognize the immense touristic potential of the Maldives as a tourist destination. Italians still own, manage, and frequent resorts, hotels, and guesthouses all over the archipelago." noted the Ambassador.

Italians are the most loyal friends and customers of the beautiful islands of the Maldives, said the Ambassador, who noted the fact that over 136,000 Italian tourists visited the Maldives in 2019, which would be the number one market from Europe and third worldwide.

"Our tourists are among the best in the world because they are respectful of local customs and interpret travel not only as a vacation but also as an experience, which I think makes a big difference." said the Ambassador.

The Ambassador said that with the easements brought to the safety measures adopted in both countries against the pandemic, direct flights operated by Alitalia and NEOs will soon resume hopefully.

"From a cultural-scientific point of view, I would like to mention the importance and the positive impact in the scientific world represented by the Italian Center of Excellence MaRHe in Magoodhoo, on Faafu Atoll, founded and run by the Milan-Bicocca University,"

"The Center allows not only Italian and Maldivian students but also researchers from all over the world to study and develop solutions for the preservation of the sea and its wildlife, preserving them for future generations,"

"The Bicocca MaRHe center has also created and donated to the Maldives in open source the recipe for a sanitizer that is made with minimum environmental impact based on coconut and frangipani, so that it may be produced by everybody during these difficult times." said the Ambassador.

Speaking further about the environment, Ambassador Manella noted the programs funded by Italy in the fields of renewable energy and climate control.

The Italian Government is one of the key contributors towards the safeguard of the Maldives, with a series of development cooperation projects worth almost EUR 6 million.

The Ambassador said that some of these projects included water desalination plants, the enhancing of the weather and climate monitoring and data management capacity of Maldives Meteorological Service (Met Office), for reducing vulnerabilities of climate change, Ocean Energy Resources Assessments, the development of a sea state forecasting system as well as initiatives for Renewable Island Energy.

"To this, we have to add a future project in renewable energy, for a further EUR 20 million, which we hope we can bring to implementation soon,"

"Moreover, as a member country of the EU, we contributed to the recent grant of 3 million Euro recently allocated to the Maldives, in aid of the tourism and health sectors,"

"We love your islands and your seas and we want to do our best to protect them." said the Ambassador.

Italians are not just in love with the incredible sea, breathtaking panoramas, sunset, white beaches, and incredible wildlife, but are also attracted by the experience of a dream vacation in the tropics, said the Ambassador who added that Italians are good but also exacting tourists.

Apart from this and besides the beauty, Italians value very much the quality of the warm hospitality of the Maldivian people and the elegance of some of the resorts, said the Ambassador.

"In fact, I must confess that the most successful ones, among my fellow citizens, are the ones run by Italians or with Italian taste. In particular, Italians are notably very sensitive to a beautiful ambiance based on our important design tradition and an attentive eye to service,"

"Moreover, I would like to stress the importance of food. Italians are very curious people but after a couple of days, they cannot live without a good pasta or pizza! So good Italian food is an important key to promote an increasing trend of tourism among the Italians." said the Ambassador.

From the development of Italian infrastructure development and politics, the Ambassador said while she did not want to presumptuously offer an Italian recipe for success, the spirit of entrepreneurship was something certainly noticeable in her nation.

Italy is one of the main manufacturing countries in the world, based largely on a number of Small and Medium enterprises that characterizes the economic system of Italy, said the Ambassador.

"Another essential component of our success lies in the ability to combine technology and design together with our famed traditions,"

"Think of the many Italian design products which are exhibited in the most famous museums of the world, such as MOMA in New York. I can make only some of the examples, like the Vespa scooter, the Bialetti coffee machine, and many items of our fashion industry,"

"In the same logic, I know that there is a trend to revive the old traditions of the Maldives, which can nourish the development of a larger system of small business, to serve as a complement to the tourist sector." said the Ambassador.

Speaking about the areas where both countries can keep up the already strong relations, the Ambassador pointed out that Italy certainly understood Maldivian issues since it is also a country with 3,000 miles of coastlines and large number of islands.

"We understand very well your worries and opportunities from interconnectivity on security and environment protection, energy production, health assistance, and the need to establish an effective school network. This is why Italy developed a strong Navy and Coast Guard and the large industry of Naval construction both for cruise ships, with over 85% of the market globally, and naval vessels over 24 meters, a sector in which Italy has 50% of the whole world market." said the Ambassador.

Both nations share the collective goal of security in the Indian Ocean region, which is vital for the Maldivian economy and tourism, in addition to world commerce. This necessarily includes the ongoing struggle against terrorism, said the Ambassador.

"I can mention, in this regard, that Italian companies are world leaders in the field of security and surveillance, such as Leonardo, which produces helicopters and radar surveillance systems that would be very well suited to the needs of an archipelago nation like the Maldives. Also, Italian shipyards, among them Fincantieri, build modern naval patrol units that could also be employed for medical evacuation and civil protection." said the Ambassador.

Diplomatic relations between the two nations have existed for almost 54 years now and the Ambassador pointed out the previously mentioned projects as well as the united front by Italy and the Maldives for last year’s UN Climate Conference COP25, among many, as a testament of the collaboration between the two. Italy will be co-sponsoring the COP26 that was to be held in Glasgow in September. It has now been postponed to 2021, but Italy is still advocating for countries to submit credible and ambitious plans as well as long-term strategies to help achieve net-zero greenhouse gas emissions, noted Ambassador Manella.

"Italy has always been one of the top supporters of the Small Island Group of Nations within the U.N. system.  When I used to work in the Italian Development Cooperation Department, we promoted many projects aimed at improving the agricultural and fishery system of the Maldives – in collaboration with FAO and IFAD - and I know that some of them are working very well. Not to mention the development cooperation carried out bilaterally or by the European Union," said the Ambassador.

On a bilateral level, the Ambassador expressed her belief that there is a large ground for improving investments and trade between the two countries, to which she pledged her support to the end.

Reaching the end of the interview, Ambassador Manella took the time to express her gratitude.

"Finally, I learned personally how friendly the Maldivian people are towards my fellow Italians. I want to take this occasion to thank with all my heart the Maldivian Government and the Ministry of Foreign Affairs for the assistance we received by during the dramatic COVID-19 crisis in the last few months, which saw the repatriation of more than 8,000 Italian nationals in the Maldives."