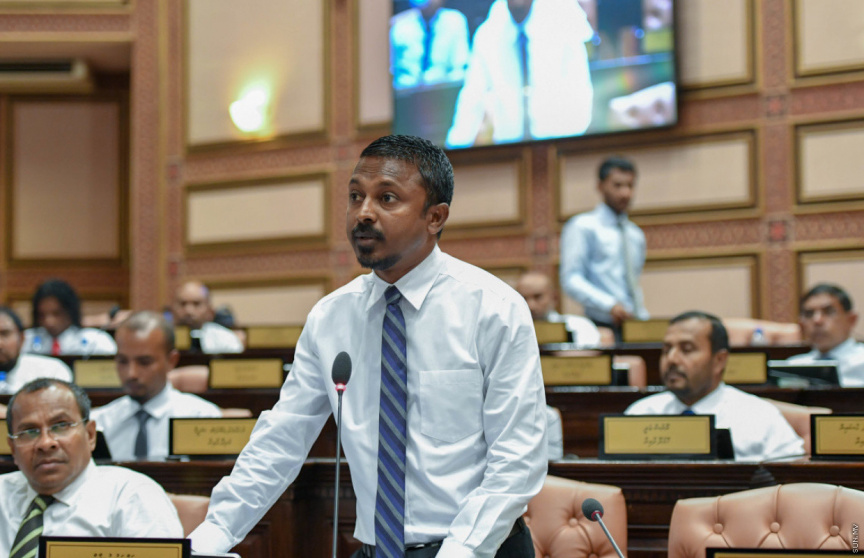 The issue of the Gulhifalhu harbor project which many fear could cause irreversible damage to the surrounding ecosystem of reefs has been submitted to the Parliament.

The issue was submitted to the parliament by MP Ahmed Usham. Regarding the issue, MP Usham said in a letter addressed to the Speaker of the Parliament that the area was frequented by residents of the Greater Male’ Area and Vilimale’ for recreational activities such as snorkeling and swimming.

The reefs around the area are also visited by students to gain experience and for other various purposes as well. MP Usham also noted that the reef was the only sport nearby where residents of Male’ area could frequent without having to pay any fees or fares.

MP Usham noted that it was mandated upon the state under Article 22 of the Constitution to protect reefs such as these since these locations held a position of significance in the community both economically and socially.

Article 22 of the Constitution states that the State has a duty to protect and preserve the natural environment, biodiversity, resources, and beauty of the country for the benefit of present and future generations.

The article also states that the State shall undertake and promote economic and social goals through ecologically balanced sustainable development and shall take measures necessary to foster conservation, prevent pollution, the extinction of many species, and ecological degradation from any such goals.

MP Usham’s letter read that the economic development projects must be run in a manner that protects and conserves the environment under Article 22 of the Constitution. The letter also called for the Parliament to ensure that the Gulhifalhu project is run in such a manner.

The land reclamation project of Gulhifalhu commercial harbor was commenced this month. Fears are already high among some stakeholders for the environmental impact of the project.

Images that were taken from the location already show large amounts of sand and sediment deposited to the location drifting towards the neighboring island of Vilimale’. MP Usham noted that the sand deposited in the area was now drifting onto the reef of Vilimale’

Despite instructions issued in the Environment Impact Assessment report to ensure that this did not happen, MP Usham said that the company in charge of the reclamation project, Boskalis Company has not undertaken any such measures.

Effects of the project could be felt by around 30 dive spots in the area, according to dive associations. The area where sand is mined is also a frequently used spot for fishermen to anchor their boats and collect baitfish. There are concerns that the project could disrupt these activities as well.

MP Usham in his letter admitted that due to the geographical formation of Maldives, it was not possible to run some infrastructure projects without reclaiming land. He especially noted the lack of land resources in the Male’ area.

Gulhifalhu was first reclaimed in 2010. The initial ten hectares were increased to 30 in a reclamation project conducted in 2013. The current project will see a whopping 192 hectares reclaimed in just a year. Sand for the project is to be mined from the 13 km stretch of sea between Male’ and Gulhifalhu.

The Environmental Impact Assessment report for the project also stated that the project could end up damaging the environment.

In his letter, MP Usham said that the destruction of the reef would bring irreversible damage to the community, before adding that the project is not run accordingly with Article 22 of the Constitution.

He called on the relevant parliamentary committees to investigate this matter quickly since the situation warranted a speedy response.

The Environment Ministry has also instructed the Director-General of Environment Protection Agency (EPA) to disclose as much information as possible about the project.

''This is the most suitable day to cease smoking''