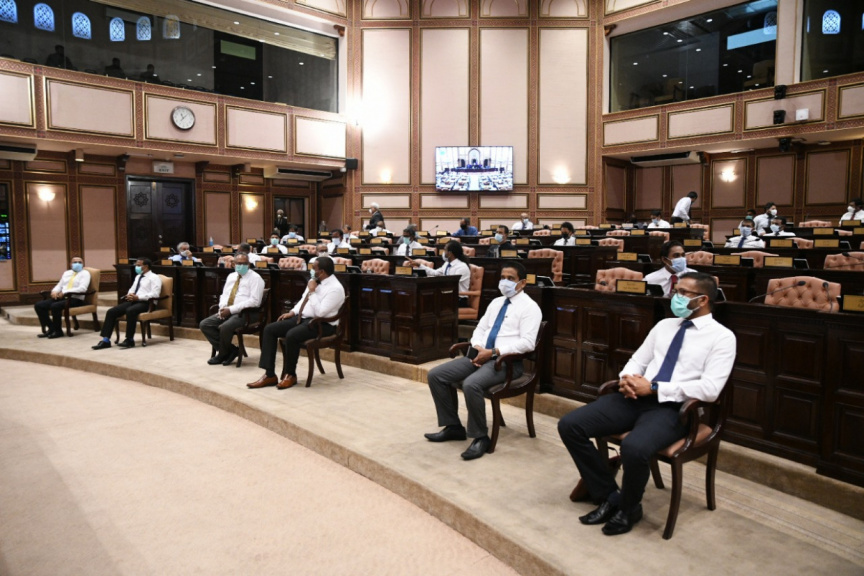 The Parliament, on Tuesday morning, began its first sitting under a “new normal” with the Maldivian capital under lockdown amid an outbreak of the new coronavirus.

The Parliament had switched to virtual sittings in late March, but in an unprecedented move, decided to discontinue its virtual sittings and gather in the legislative house to deliberate on a constitutional amendment to extend the term of incumbent councilors – an amendment presented by the Maldivian government following the decision to postpone the local council elections – as a remedy to the legal vacuum which Maldives will face once the term of incumbent councilors expires on June 3.

Parliamentarians attended this Tuesday’s sitting wearing masks. They were seated with at least one empty seat between them. There were some extra seats inside the chambers, and the Parliament Speaker, former President Mohamed Nasheed announced that those seated in the extra seats must wait 30 minutes before returning to their assigned seats.

The parliamentarians found it difficult to speak wearing masks.

Once the sitting began, Hulhumale’ MP Ali Niyaz said he found it extremely difficult to speak with his mask on. He readjusted his mask several times as he made the complaint.

Nasheed responded that the masks were necessary given the situation.

Hoarafushi MP Ahmed Saleem interjected that he too had noticed masks were slowing down the speed of speech.

To this, Nasheed responded that he too found it difficult to speak with the mask on, and that he was therefore granting extra debate time to make up for the lag.

He suggested the parliamentarians just needed time to adjust to the change.

“We shall gain expertise in speaking with our masks on in no time. I expect we will be very prepared for this by the end of today. Now I’m looking to see if there’s a specific technique. I will share it with honorable parliamentarians as soon as I learn of such a technique,” said Nasheed.

Central Henveyru MP Ali Azim raised a point of order and said that that he found it impossible to speak with his mask on. He said that with the mask on, his breath was fogging up his prescription glasses, compromising his vision.

He said that the Health Protection Agency (HPA)’s latest guidelines did not say masks were compulsory.

Nasheed responded that minimizing mouth and facial movements while speaking would provide a measure of relief to the issue.

He said that COVID-19 was a new disease, and that health experts were therefore constantly revising their instructions. He said that keeping the masks on was safer.

Parliamentarians were also made to rotate between their assigned seats and the extra seats inside the chambers every 30 minutes given that the normal seating arrangement does not allow for sufficient physical distance. This became another change they had trouble adjusting to.

Nasheed, when he provided instructions to the parliamentarians regarding the change, asked that they use their common sense.

HPA issued permission for Parliament to resume its sitting under strict instructions that they comply with anti-virus measures including wearing masks, having their temperature checked and maintaining social distancing.

Hisaan: The only option is to amend the Constitution