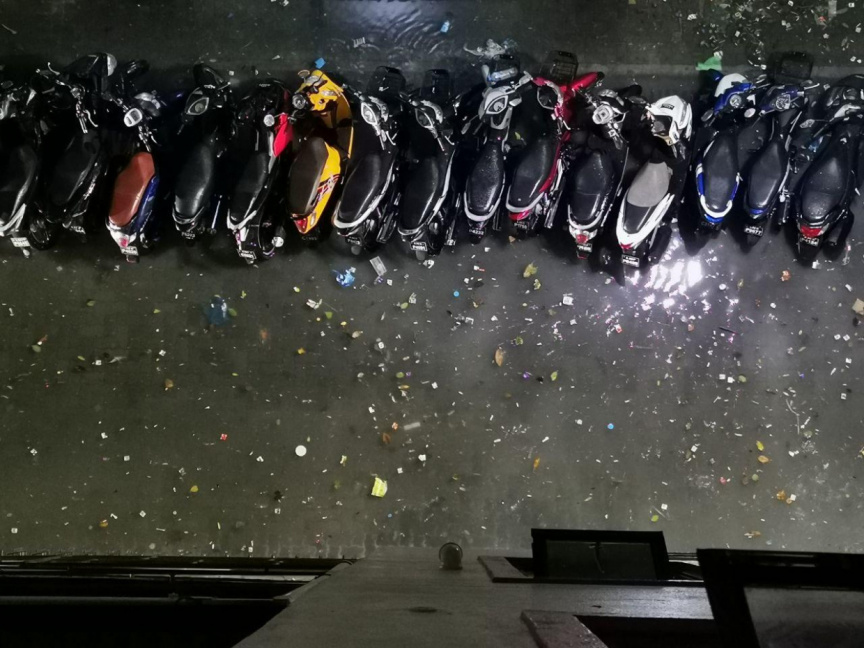 Photo shows an overhead view of a street in Male' City strewn with litter floating as the capital was flooded during a spell of bad weather on May 18, 2020. (Sun Photo/Fayaz Moosa)

Male’ City, as well as several islands in the Maldives, experienced heavy rainfall and strong winds causing flooding on the streets.

Maldives Meteorological Services estimated that 48 mm of rain had fallen on the capital within the last 48 hours. The flooding was most likely due to the high amount of rainfall. Garbage was strewn across streets in the floodwaters as the water levels rose.

Some members of the public even complained of leakages from junctions.

Met Office warned that the country could experience strong winds of 50-60 miles during gusts and cautioned to remain alert to the weather. Storm surges could also be experienced across the country during high tide. The Defense Force had been actively pumping the waters from the streets. Water was pumped from three locations across the city.

Other islands that suffered severe weather include G. Dh. Thinadhoo, Vaadhoo, Hoadedhdhoo, and Madaveli. Some islands in the atolls also experienced extensive damage to households due to the strong winds and heavy rain.

The islands of L. Fonadhoo and L. Maamendhoo also sustained damage during the spell of bad weather. Fonadhoo Council President Ahmed Riyaaz stated that the strong winds had blown off roofs of some houses. Agricultural plots on the island also suffered damage. He added that no reports of water entering homes were received and stated that a hotline was established to report damages.

The bad weather is attributed to the beginning of the rainy season as well as the indirect effects of Cyclone Amphan in the Bay of Bengal.