Japan plunges into recession as US states start opening up 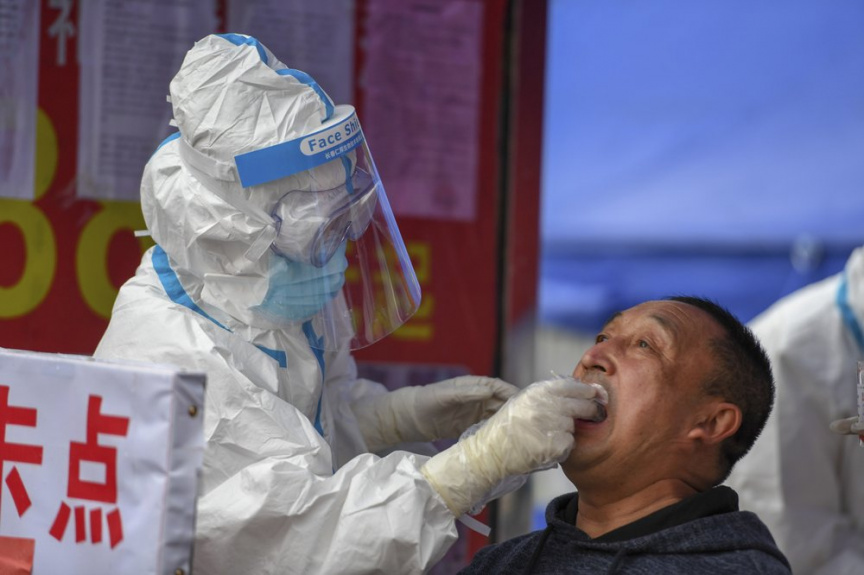 In this May 17, 2020, photo released by Xinhua News Agency, a medical worker collects sample for COVID-19 testing at the Tongji community in Shulan in northeastern China's Jilin Province. (Zhang Nan/Xinhua via AP)

NEW YORK (AP) — Japan’s economy plunged into recession in the first quarter as the coronavirus pandemic squelched business activity, while leaders in the U.S. and Europe are weighing the risks and rewards of lifting COVID-19 restrictions knowing that a vaccine could take years to develop.

China, which reported just seven new cases on Monday, maintained tighter social distancing rules in parts of the northeastern province of Jilin after a cluster of cases of unknown origin turned up in the area. Two of the new cases were in Jilin and residents were being required to show certificates of health, including a recent negative nucleic acid test, if they wished to leave Jilin city, the province’s second-largest metropolis, state media reported.

In other parts of the country, restrictions have been gradually lifted and many in Beijing, where no cases have been reported in weeks, have stopped wearing masks outdoors, although most establishments still require they do so when indoors and on public transport. Despite reopening moves, central government petition offices in Beijing, where people come from across the country to register complaints, will remain closed for the time being.

Japan is extremely vulnerable to repercussions from the pandemic given its dependence on trade with both China and the U.S.

In hard-hit Italy, Premier Giuseppe Conte acceded to a push by regional leaders to allow restaurants, bars and beach facilities to reopen Monday, weeks ahead of an earlier timetable.

“We are confronting this risk, and we need to accept it, otherwise we would never be able to relaunch,” Conte said.

That came as governments worldwide and many U.S. states struggle with restarting economies battered by the pandemic. In the U.S., images of crowded bars, beaches and boardwalks suggested some weren’t heeding warnings to safely enjoy reopened spaces while limiting the risks of spreading infection.

British Prime Minister Boris Johnson, who was hospitalized last month with COVID-19, speculated Sunday that a vaccine may not be developed at all, despite the huge global effort to produce one.

“There remains a very long way to go, and I must be frank that a vaccine might not come to fruition,” Johnson wrote in Sunday’s edition of the Mail newspaper.

Health experts say the world could be months, if not years, away from having a vaccine available to everyone, and they have warned that easing restrictions too quickly could cause the virus to rebound.

President Donald Trump, by contrast, promised Americans a speedy return to normalcy that sounded far more optimistic than most experts say is realistic.

“We’re looking at vaccines, we’re looking at cures and we are very, very far down the line,” he said while calling into a charity golf tournament broadcast Sunday on NBC.

One of Trump’s top economic advisers, Peter Navarro, also criticized the Centers for Disease Control and Prevention’s early response to the coronavirus outbreak, saying it “let the country down” after initial delays with testing.

With 36 million newly unemployed in the U.S. alone, economic pressures are building even as authorities acknowledge that reopening risks setting off new waves of infections and deaths. Many states have lifted stay-at-home orders and other restrictions, allowing some types of businesses to reopen.

The coronavirus has infected over 4.7 million people and killed more than 315,000 worldwide, according to a tally by Johns Hopkins University that experts say under counts the true toll of the pandemic. The U.S. has reported over 89,000 dead and Europe has seen at least 160,000 deaths.

For most people, the coronavirus causes mild or moderate symptoms. For some, especially older adults and people with existing health problems, it can cause more severe illness and lead to death.

Paula Walborsky, a 74-year-old retired attorney in Tallahassee, Florida, has resisted the temptation to get her hair done and turned down dinner invitations from close friends. But when one of her city’s public swimming pools reopened by appointment, she decided to test the waters.

“I was so excited to be back in the water, and it just felt wonderful,” Walborsky said.

New York Gov. Andrew Cuomo got tested for the coronavirus on live television Sunday. Any New Yorkers experiencing flu-like symptoms or those returning to work can now get tested, he said.

The Los Angeles Police Department wants to test everyone its officers arrest to determine whether they are infected with the coronavirus, while businesses that defy Illinois Gov. J.B. Pritzker’s stay-at-home order could face a misdemeanor under emergency rules his administration has filed.

South Korea reported 15 new coronavirus cases and one more death, but just two new cases were reported in the Seoul metropolitan area, where tens of thousands were tested in recent weeks after health officials discovered dozens of infections linked to club goers.

In the Philippines, crowds returned to shopping malls in the capital, Manila, after a two-month lockdown was partially relaxed over the weekend.

In Brazil, President Jair Bolsonaro greeted hundreds of supporters — and joined some in performing pushups — who gathered before the presidential offices Sunday to back his open-the-economy drive even as the coronavirus sweeps across the country.

On the treatment front, Oregon health officials say hospitals will be provided with an experimental drug that has shown some promise combating the virus. The Oregon Health Authority said Sunday that the state has received enough doses of remdesivir to treat all patients who met the medical criteria for using the drug as of Saturday.

Recent early results for the drug suggested it could help patients recover from the coronavirus faster, although longer-term data is still needed to confirm any benefits.

WHO bows to calls from countries for independent probe