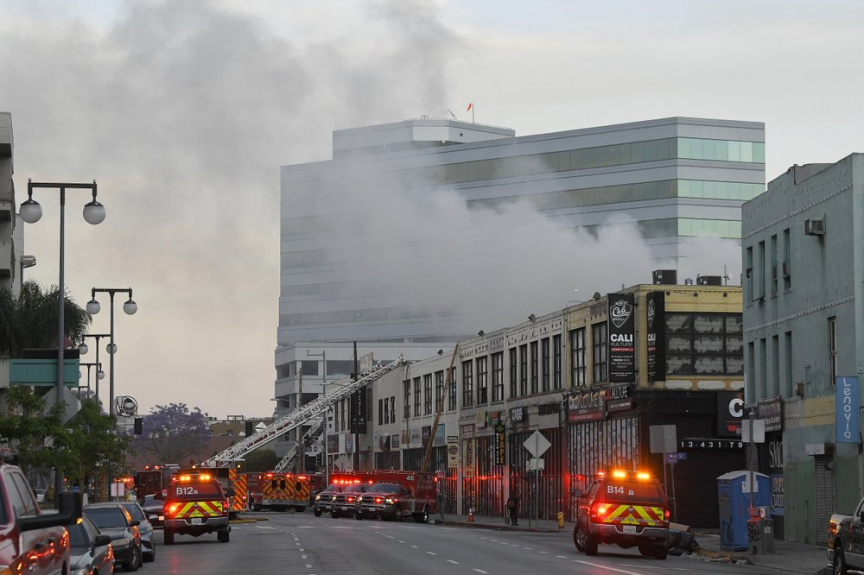 LOS ANGELES (AP) — An explosion Saturday at a hash oil manufacturer in downtown Los Angeles injured 11 firefighters who had gone inside the building after an initial report of a fire and then had to run for their lives when a ball of flames shot out the building and scorched a fire truck across the street.

Los Angeles Fire Department Capt. Erik Scott said “one significant explosion” shook the neighborhood around 6:30 p.m. Firefighters inside had to run through a wall of flames he estimated as 30 feet high and wide, and those on the roof scrambled down a ladder that was engulfed in fire.

He said people at the scene described the explosion as sounding like a freight train or jet engine. The fleeing firefighters tore off their protective equipment that had burned and helmets that melted, Scott said.

“The was one of the worst scene’s I’ve seen,” he said.

Scott said the building was a warehouse for SmokeTokes, which he described as a maker of “butane honey oil.” Butane is an odorless gas that easily ignites, and it’s used in the process to extract the high-inducing chemical THC from cannabis plants to create a highly potent concentrate also known as hash oil. The oil is used in vape pens, edibles, waxes and other products.

On its website, SmokeTokes advertises a wide variety of products including “puff bars,” pipes, “dab” tools, vaporizers, “torches and butane,” and cartridges. The company says it is “an international distributor and wholesaler of smoking and vaping products, and related accessories.” Founded in 2009, it offers “discounts to loyal customers, fast shipping, a huge catalog of products and customer service that is untouched.”

Firefighters were initially called to 327 East Boyd St. in the city’s Toy District for a report of a fire at a one-story commercial building. Firefighters entered the building, and there was nothing unusual until the explosion occurred, sending flames through the roof and a plume of smoke visible for miles against the clear blue sky.

More than 200 firefighters rushed to the scene, and dozens of engines, trucks and rescue vehicles clogged the streets. The fire spread to several nearby buildings, but firefighters were able to douse it in about an hour.

Record-breaking economic plunge expected for US