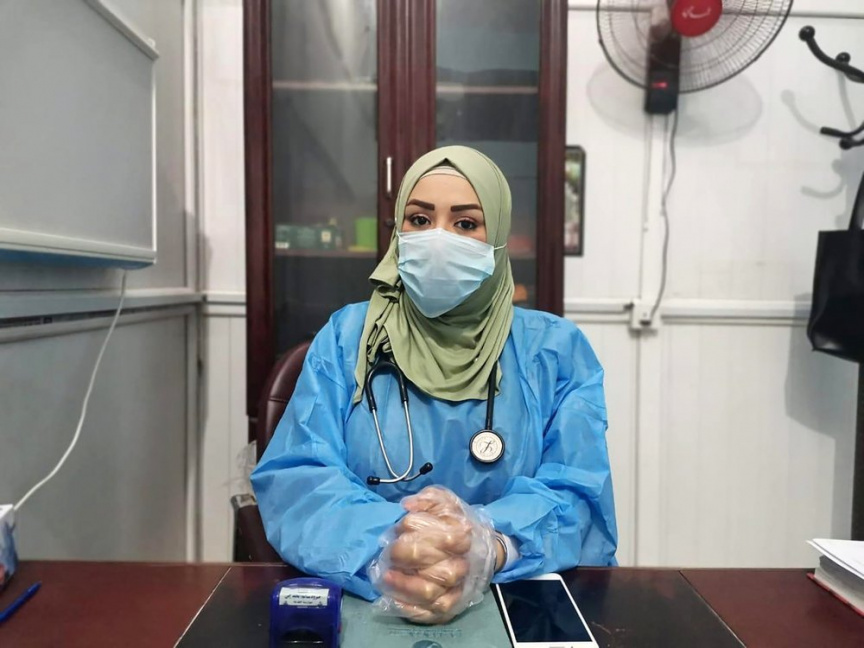 This May 13, 2020, picture provided by Dr. Marwa al-Khafaji shows the doctor back at work after 20 days in isolation after she tested positive for the coronavirus at a hospital in Karbala, Iraq. Dr. Marwa al-Khafaji’s homecoming from a hospital isolation ward was tainted by spite. Someone had barricaded her family home’s gate with a concrete block. The message from the neighbors was clear: She had survived coronavirus, but the stigma of having had the disease would be a more pernicious fight. (AP Photo)

BAGHDAD (AP) — Dr. Marwa al-Khafaji’s homecoming after 20 days in a hospital isolation ward was met by spite. Someone had barricaded her family home’s gate with a concrete block.

The message from the neighbors was clear: She had survived coronavirus, but the stigma surrounding the disease would be a more pernicious fight.

The young physician was catapulted into the front lines of Iraq’s battle with the virus in early March. The Associated Press followed her tale from inside a squalid quarantine room to her return to the streets of her childhood, where she found piercing glares had displaced greetings.

Her struggles mirror those of Iraq’s battered health system, laid bare by the pandemic: Hospitals without supplies, medical staff intimidated by an unknown disease, and widespread stigma associated with infection.

Fear of stigma — driven by religious beliefs, customs, and a deep mistrust of the health system — has been the main driver of the pandemic in Iraq, doctors say, as people hide their illness and avoid seeking help.

At least 115 people have died among more than 3,030 confirmed coronavirus cases across Iraq, according to Health Ministry statistics. The daily rate of cases jumped after curfew hours were shortened for the holy month of Ramadan, from 29 on April 22 to 119 on Wednesday. Officials fear a flare-up would be catastrophic.

Iraqi officials described the ministry’s response as adequate and said Iraq was spared the exponential rise in cases seen in neighboring Iran and Turkey.

Ministry spokesman Saif al-Badr blamed the spread on people who had symptoms or came from an affected country and “didn’t disclose these facts due to arrogance.”

But Khafaji’s story, as well as interviews with half a dozen doctors and nurses, reveal a haphazard response with no comprehensive strategy from a hobbled government that until recently had only caretaker status.

“Inside quarantine, the future felt uncertain,” Khafaji said. “Outside it’s no different.”

In mid-March, Khafaji, 39, grew alarmed when her elderly mother, Dhikra Saoud, showed signs of respiratory distress. The virus had just started to hit Iraq and had yet to leave its mark on the city of Karbala where she lives.

But the doctor connected the dots. Days before, her father showed mild flu-like symptoms that she treated at home. Now her mother was presenting the same but in acute form.

She was certain it was coronavirus. But at three different hospitals, doctors refused to test her mother. At the time, the limited test kits were rationed for those who had been to Iran.

At each hospital visit, Khafaji’s mother was afraid the neighbors would hear where she was. “I beg you. Take me home,” she said.

Her symptoms worsened until a tearful Khafaji pleaded to a physician friend at 3 a.m.: Please, “give my mother the test.” He agreed.

On March 19, policemen came to the house to take both mother and daughter to the hospital. Both had tested positive. Here again, was a repercussion of the stigma: People often refuse to be quarantined, so police are sent to force them.

Khafaji knew the shortcomings of the system she worked in. Inside quarantine, she experienced it from the eyes of a patient.

On the first day, Khafaji’s mother looked at the squalid ward in disgust. “You have brought me to prison,” she said.

The quarantine zone of the Imam Hussein teaching hospital was a communal ward, with patients separated by metal screens. The floors were cracked, mold bloomed in the shared bathroom, dust-coated surfaces despite daily cleanings.

Khafaji was no stranger to hardship: The mother of a 5-year-old, she recently divorced a husband who shot her in the leg following a domestic dispute. She asked the staff for cleaning materials and scrubbed the room and bathrooms herself.

When the sheets and blankets remained unwashed for days, she threw hers out in protest.

Iraq’s centralized health system, largely unchanged since the 1970s, has been ground down by decades of wars, sanctions, and prolonged unrest since the 2003 U.S. invasion, with little investment from successive governments.

There are eight physicians and 1.4 hospital beds per 10,000 people. The country of 38 million has at most 600 ventilators, a Health Ministry official said. One Karbala doctor, Assel Saad Saleh, said his hospital sees 1,000 patients a day, well over triple its capacity.

“Patients get angry with lack of supplies, drugs, and testing kits,” he said.

The patients who flowed into the quarantine during Khafaji’s stay reflected the course of the virus in Iraq. First came pilgrims returning from Iran, then those from Syria. Finally, patients with no travel history whatsoever.

At 8 a.m. she woke her mother, served breakfast, and waited for the doctor’s morning check to see what treatment or testing he might order. She often interjected with her own medical opinion. When one doctor proscribed a patient nebulizer therapy twice daily, she said it was needed every hour.

At night, given the doctor shortage, Khafaji monitored patients and reported changes to nurses who checked in only every six hours, trembling as they approached virus patients.

She stood aghast when an emergency physician told her he didn’t know how to intubate a patient’s airway.

“They are untrained,” she said. “And they are afraid of us.”

On her worst day, she suffered fatigue, headache, and a high fever.

On April 10, Khafaji and her mother tested negative for the virus and could leave.

But another crisis awaited: the cement blocks that neighbors had erected, blocking their home’s front and back gates.

Even after they were removed, things weren’t the same.

When her son goes to play in the garden, Khafaji hears other mothers calling their children back into the house.

By May, she was back putting in 12-hour shifts at the hospital on an $800 a month stipend, the average physician’s salary in Iraq. At her request, she works in the waiting room, helping diagnose potential virus patients.

“Everyone has a limit,” she said. “I haven’t reached it till now.”

US combat mission in Iraq to conclude by year end

Death toll rises to 92 in blaze at Iraq Covid ward

Japan plunges into recession as US states start opening