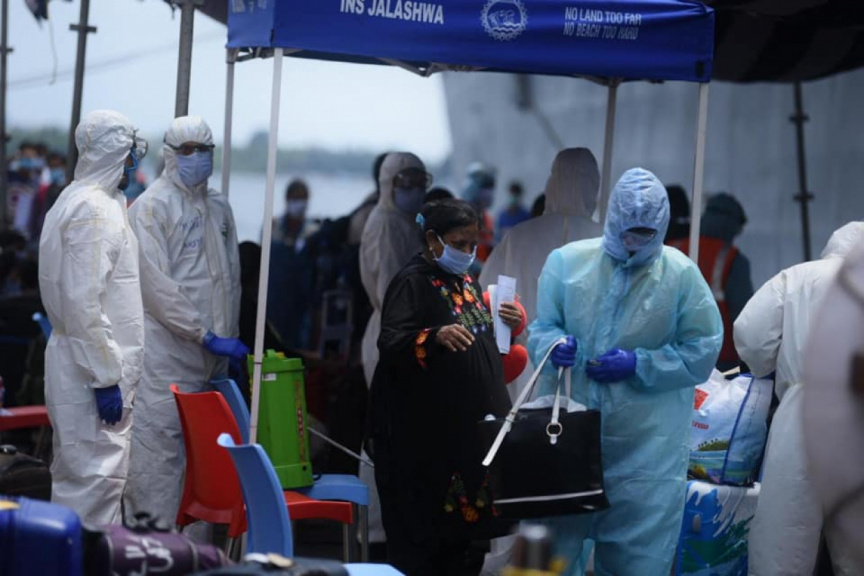 Indian nationals board a Indian Navy ship to be evacuated out of Maldives. (Photo/Maldives Ports Limited)

Two Indian nationals who were evacuated out of Maldives in a special operation run by the Indian Navy have tested positive for COVID-19.

According to Times of India, the two were identified during testing done on evacuees on Tuesday. They were identified as natives of Tiruchirappalli, a city located in Tamil Nadu.

The news outlet’s report carried no further details regarding the two cases.

More than 900 Indian nationals have been evacuated out of Maldives by the Indian Navy. The ships travelled from Male’ City to Kochi, where the evacuees will undergo 14 days of quarantine before they are allowed to travel to their final destinations.

Indian Navy ships had carried evacuees out of Maldives on Sunday and Friday. It is unclear on board which ship the Indian nationals who tested positive had travelled on.

Meanwhile, the Indian Navy is scheduled to evacuate more Indian nationals from Maldives on Friday.

According to the Indian High Commission, the evacuation is solely for residents of the State of Kerala and the Union Territory of Lakshadweep, and plans are in motion to hold Air India flights to evacuate residents of other Indian states who live in Maldives.

According to the High Commission, the evacuation flights from Male’ will be held to New Delhi, Bangalore, Mumbai, and Chennai.

Maldives hosts a population of some 27,000 Indian nationals.

The High Commission has stated it is prioritizing evacuating those registered on compelling grounds such as preexisting medical condition, pregnancy, elderly, death in family, stranded tourists, workers who have lost their jobs and destitute cases.

904 people have tested positive for COVID-19 in Maldives, including 72 Indian nationals.