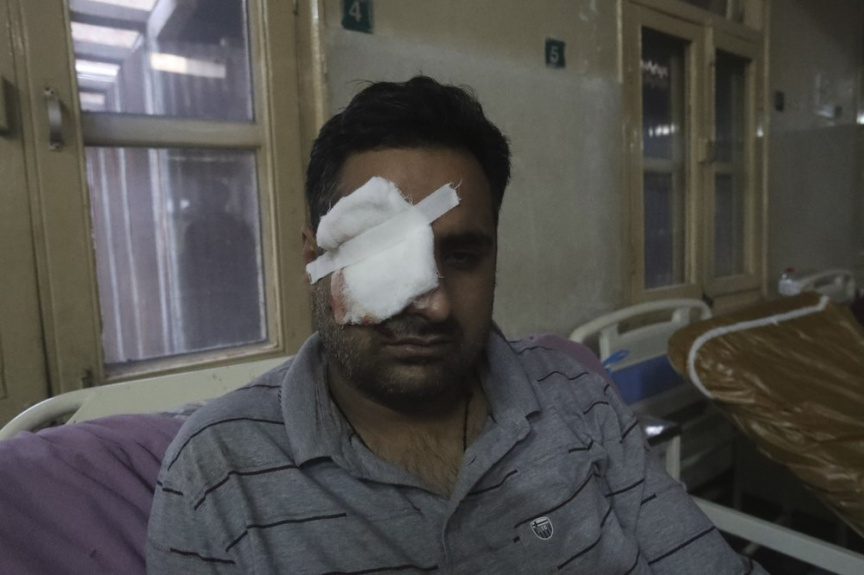 A Kashmiri muslim civilian Umer Matto rests on a hospital bed after he and his mother Shaida were injured by shotgun pellet allegedly fired by police inside their home in Srinagar, Indian controlled Kashmir, Friday, Aug. 8, 2020. (AP Photo/Mukhtar Khan)

SRINAGAR, India (AP) — Anti-India protests and clashes continued for a third day in disputed Kashmir on Friday following the killing of a top rebel leader by government forces.

Rebel commander Riyaz Naikoo and his aide were killed in a gunfight with Indian troops on Wednesday in the southern Awantipora area, leading to massive clashes at several places.

At least one man was killed and 50 others were injured in the three days of clashes, residents and medics said. Most of the injured were treated locally. However, at least a dozen people with bullet and pellet injuries were taken to a hospital in Srinagar, the region’s main city, for treatment, a doctor said on condition of anonymity because medics have been barred from briefing news media. She said most of the injured had been hit by pellets in one or both eyes.

Residents said government forces swooped into the rebel leader’s native village on Thursday, and accused them of vandalizing a tent which villagers had set up for mourning his death, triggering large protests and clashes in the area.

Authorities did not hand over the bodies of the two slain rebels to their families under a new government policy designed to thwart large-scale funerals that have become a rallying point for anti-India protests. Instead, police buried the bodies in a mountainous graveyard about 100 kilometers (60 miles) from the village.

Authorities have shut down cellphone and mobile internet service since Wednesday, a common Indian tactic in the region when such protests erupt. They also imposed a near total information blackout and refused to brief media about the situation.

Hindu-majority India imposed similar measures in 2019 when it revoked the predominantly Muslim region’s semi-autonomous status and statehood and imposed direct federal rule. At that time it launched a monthslong total communication blackout and an unprecedented military crackdown in the strife-torn region.

Indian security officials and some members of the ruling Bharatiya Janata Party called Naikoo’s death a major victory against the insurgents. Naikoo, 35, was the chief of operations of the region’s largest indigenous rebel group, Hizbul Mujahideen, which has spearheaded an armed rebellion against Indian rule.

He was the group’s top commander for almost eight years and shot into prominence during a 2016 public uprising following the killing of the group’s charismatic leader, Burhan Wani. After Wani’s death, Naikoo helped give new life to the militant movement. Security officials say he was the most wanted militant in Kashmir.

India has stepped up its counterinsurgency operations across Kashmir in recent months during a coronavirus lockdown. Militants have also continued their attacks on government forces and alleged informants.

India and Pakistan each administer part of Kashmir, but both claim the region in its entirety. Rebels have been fighting Indian control since 1989. About 70,000 people have been killed in the uprising and the ensuing Indian military crackdown.

Most Kashmiris deeply resent Indian rule and support the rebels’ call for the territory be united, either under Pakistani rule or as an independent country.

Exchange of fire with India kills boy in Kashmir