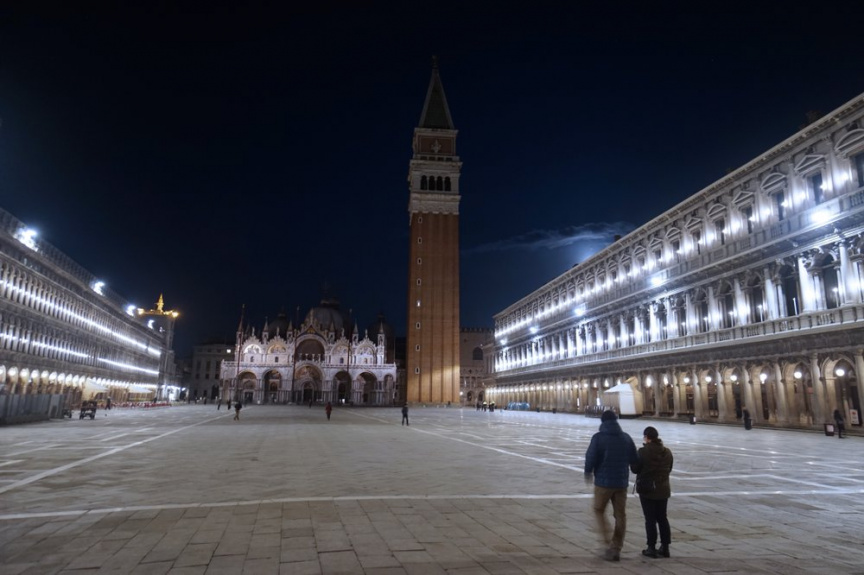 People walk in an almost empty St. Mark's Square in Venice, Italy, Monday, March 9, 2020. Italian Premier Giuseppe Conte says he is restricting travel nationwide to try to stop the spread of the new coronavirus. Conte said Monday night a new government decree will require all people in Italy to demonstrate they need to work, have health conditions or other limited legitimate reasons to travel outside their home areas. (Anteo Marinoni/LaPresse via AP)

The number of people who passed away from the COVID-19 pandemic virus in Italy has reached 30,000, making it the country with the highest death toll in the whole EU.

Italy was the first country in Europe to impose a lockdown when COVID-19 cases first started to surface in the Lombardy region. The country was even criticized for not taking the virus seriously back then.

It reported 243 new fatalities on Friday taking the total to 30,201. The figure for Friday is lower when compared with the previous day which recorded 274 deaths.

The daily number of confirmed new cases fell slightly to 1,327, bringing the total number of infections in the country to 217,185.

Italy has the third-highest number of officially recorded coronavirus deaths in the world, after the United States and the UK. Britain passed the 30,000 fatalities mark on Wednesday. Spain is Europe's third worst-affected country with more than 26,000 deaths.

It has now begun to ease restrictions, although pictures shared on social media of people ignoring distancing rules and not wearing protective masks in busy areas have led to an outcry.

Italy’s ‘Patient No. 1’ joins race as sign of hope