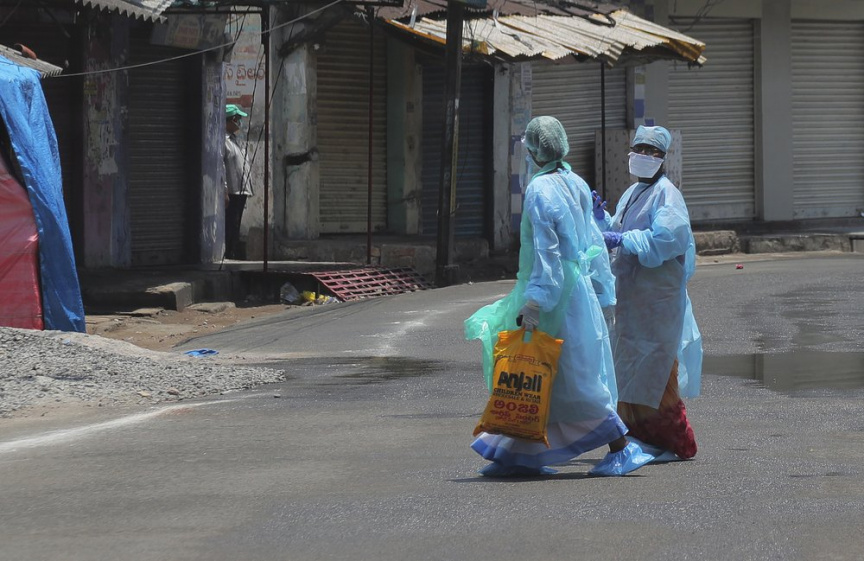 Indian health workers walk inside a containment zone during lockdown to prevent the spread of new coronavirus in Hyderabad, India, Sunday, April 26, 2020. (AP Photo/Mahesh Kumar A.)

BANGKOK (AP) — Indian Prime Minister Narendra Modi has cautioned the country’s 1.3 billion people against any complacency in the fight against the coronavirus.

On a Sunday radio talk show, Modi said that people will have to change their habits by sticking to social distancing, wearing masks and not spitting in public.

“There should be no negligence at any local level due to overconfidence,” he said. “We have to be very careful about this for a long time to come.”

He also said that a traditional system of Indian medicine, known as Ayurveda, which strongly recommends yoga exercises and drinking hot water, can be extremely helpful in building immunity.

Modi put India under a strict lockdown on March 25. The restrictions, which run until May 3, have been eased somewhat by allowing shops to reopen and manufacturing and farming activities to resume in rural areas to help millions of poor daily wage earners.

India has confirmed 25,671 cases of the coronavirus, including 824 deaths.

— HONG KONG PROTESTERS DEFY BAN: Pro-democracy demonstrators gathered in a Hong Kong mall on Sunday, chanting pro-democracy slogans despite a ban on gatherings. Police entered the Cityplaza shopping mall in Tai Koo to disperse the crowds. The demonstration follows the arrests last week of 15 former lawmakers and pro-democracy activists on charges stemming from huge rallies that started last June against a controversial extradition bill. The bill was later withdrawn, but protests continued for several months. Hong Kong reported no new coronavirus cases on Sunday for the third time in a week. The city has confirmed 1,038 cases, including four deaths.

— INDIA’S MUSLIMS REASSURED: A Hindu nationalist organization chief has assured India’s minorities, mainly Muslims, that there will be no discrimination on the basis of religion in the battle against the coronavirus. Mohan Bhagwat, head of Rashtriya Swayamsevak Sangh, said in an online address Sunday that no group can be blamed as a whole for the acts of some of its members. The RSS is the ideological mentor of Prime Minister Narendra Modi’s Hindu nationalist Bharatiya Janata Party. Bhagwat’s remarks came amid criticism by the BJP and Hindu groups of an Islamic missionary meeting in the Indian capital last month that triggered a surge in coronavirus cases. Muslims comprise about 14% of India’s 1.3 billion people.

— NEPAL EXTENDS LOCKDOWN: Nepal extended its lockdown to May 7 and the closure of its borders to May 13 to prevent the spread of the coronavirus. Information Minister Yuba Raj Khatiwada said the decision was made by the Cabinet on Sunday. The first lockdown was announced on March 24 and has been extended several times, shutting down schools and major markets and prohibiting people from leaving their homes. Flights have been halted and road transport has been barred. Nepal has 51 confirmed cases of the coronavirus, with no deaths.

— CHINA SEES NO DEATHS AGAIN: China on Sunday reported no new deaths from the coronavirus for the 11th straight day. It also confirmed 11 more cases, raising its total to 82,827. Five of the new cases were in Heilongjiang province, a northeastern border area with Russia that has seen a surge in infections. Another was in Guangdong province, a manufacturing and tech region bordering Hong Kong in the south. The other five were imported from overseas. China has identified 1,634 imported cases in all.

— 931 NEW CASES IN SINGAPORE: Singapore reported 931 new cases to raise its total to 13,624. Most of the new infections are from foreign workers’ dormitories, which have been locked down as the government struggles to curb the outbreak.

— HONG KONG HELPS STRANDED CITIZENS: Hong Kong is trying to help more than 5,000 residents return home from India and Pakistan after those countries banned all international flights to combat the coronavirus. The Hong Kong Immigration Department has reached about 3,200 residents in India and 2,000 in Pakistan, scattered around both countries, according to a government news release. The government plans to fly back residents in phases, starting with chartered flights from New Delhi and Islamabad for those in and around those two cities, as well as the sick, pregnant woman, children and the elderly. Passengers will have to pay for their flights.

— BANGLADESH PASSES 5,000 CASES: Bangladesh reported 418 new cases of the coronavirus on Sunday, raising its confirmed total to 5,416, including 145 deaths. The South Asian country of 160 million people has only 25 facilities to test suspected cases, meaning the actual number of infections could be much higher. Health experts say the situation may not peak until the end of May, raising concerns in the country, which has a fragile health care system.

— SOUTH KOREA HAS 10 MORE CASES: South Korea on Sunday confirmed 10 more cases of the coronavirus over the past 24 hours, a continuation of a slowing caseload in the country. The additional infections mark the ninth day in a row that South Korea’s daily increase was below 20. The state-run Korea Centers for Disease Control and Prevention said the caseload stood at 10,728, including 242 deaths.

— SRI LANKA ASKS KUWAIT TO EXTEND WORKERS’ STAY: Sri Lanka has asked Kuwait to allow thousands of overstaying workers to remain in the country until May 30 because Sri Lanka is under a 24-hour coronavirus curfew. Kuwait has granted an amnesty from April 1-30 to all undocumented foreigners to leave at Kuwait’s expense without paying fines. More than 15,000 Sri Lankans are currently overstaying in Kuwait. They had been given until Saturday to leave. Sri Lanka’s international airport has been closed since last month due to the pandemic. The Indian Ocean island nation has confirmed 460 cases, including seven deaths.

India’s pandemic death toll could be in the millions

Plan to use malaria drug in slums temporarily shelved