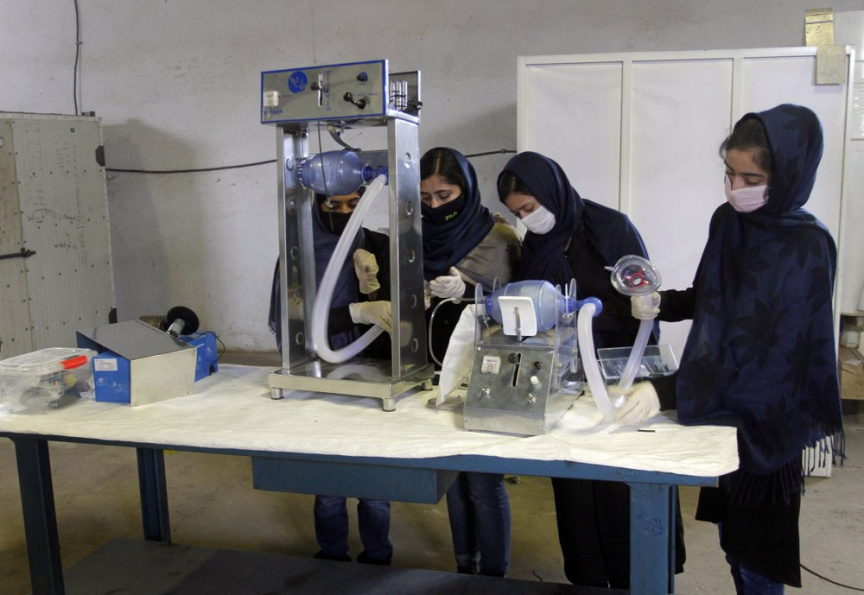 In this Wednesday, April 8, 2020 photo, a group of young girls are developing two types of cheap ventilator devices using Toyota car spare parts to help the fight against the coronavirus pandemic in Herat, west of Kabul, Afghanistan. (AP Photo/Hamed Safarazi)

KABUL, Afghanistan (AP) — On most mornings, Somaya Farooqi and four other teen-age girls pile into her dad’s car and head to a mechanic’s workshop. They use back roads to skirt police checkpoints set up to enforce a lockdown in their city of Herat, one of Afghanistan’s hot spots of the coronavirus pandemic.

The members of Afghanistan’s prize-winning girls’ robotics team say they’re on a life-saving mission — to build a ventilator from used car parts and help their war-stricken country battle the virus.

“If we even save one life with our device, we will be proud,” said Farooqi, 17.

Their pursuit of a low-cost breathing machine is particularly remarkable in conservative Afghanistan. Only a generation ago, during the rule of the Islamic fundamentalist Taliban in the late 1990s, girls weren’t allowed to go to school. Farooqi’s mother was pulled from school in third grade.

After the U.S. invasion of Afghanistan in 2001, girls returned to schools, but gaining equal rights remains a struggle. Farooqi is undaunted. “We are the new generation,” she said in a phone interview. “We fight and work for people. Girl and boy, it does not matter anymore.”

Afghanistan faces the pandemic nearly empty-handed. It has only 400 ventilators for a population of more than 36.6 million. So far, it has reported just over 900 coronavirus cases, including 30 deaths, but the actual number is suspected to be much higher since test kits are in short supply.

Herat province in western Afghanistan is one of the nation’s hot spots because of its proximity to Iran, the region’s epicenter of the outbreak.

This has spurred Farooqi and her team members, ages 14 to 17, to help come up with a solution.

On a typical morning, Farooqi’s father collects the girls from their homes and drives them to the team’s office in Herat, zigzagging through side streets to skirt checkpoints. From there, another car takes them to a mechanic’s workshop on the outskirts of the city.

In Herat, residents are only permitted to leave their homes for urgent needs. The robotics team has a limited number of special permits for cars.

So far, Farooqi’s father hasn’t been able to get one, but the girls are in a hurry. “We are concerned about security driving out of the city but there is no other option, we have to try to save people’s lives,” Farooqi said.

At the workshop, the team is experimenting with two different designs, including an open-source blueprint from the Massachusetts Institute of Technology. The parts being used include the motor of a Toyota windshield wiper, batteries and sets of bag valve masks, or manual oxygen pumps. A group of mechanics helps them build the frame of a ventilator.

Daniela Rus, a professor at MIT, welcomed the team’s initiative to develop the prototype. “It will be excellent to see it tested and locally produced,” she said.

Tech entrepreneur Roya Mahboob, who founded the team and raises funds to empower girls, said she hopes Farooqi’s group will finish building a prototype by May or June. In all, the team has 15 members who work on various projects.

The ventilator model, once completed, would then be sent to the Health Ministry for testing, initially on animals, said spokesman Wahid Mayar.

Farooqi, who was just 14 years old when she participated in the first World Robot Olympiad in the U.S., in 2017, said she and her team members hope to make a contribution.

“Afghans should be helping Afghanistan in this pandemic,” she said. “We should not wait for others.”