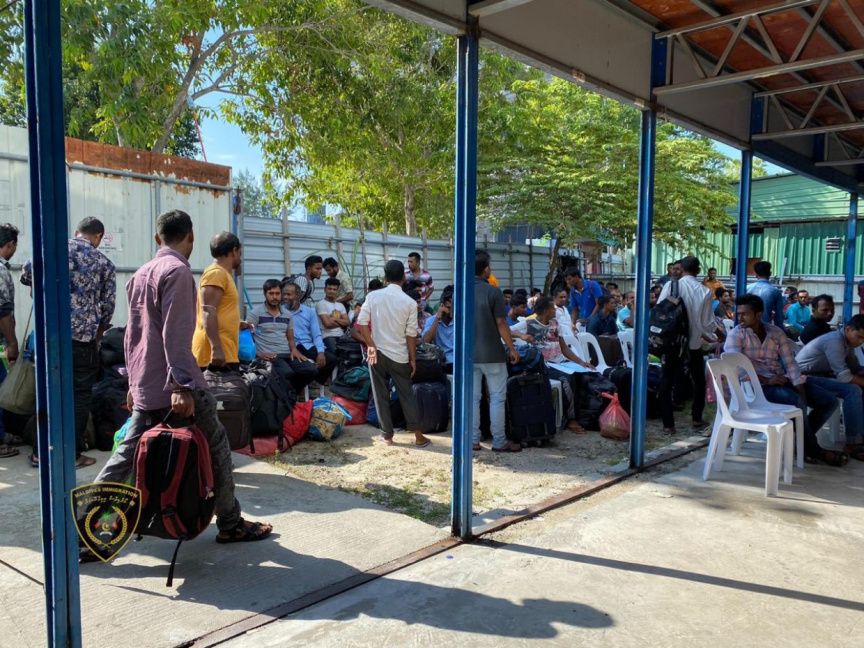 Photo shows migrant workers in the Maldives waiting to be registered and moved to a government special facility in Hulhumale'. (Photo/Immigration)

The government of Maldives has begun work to move migrant workers to special facilities as a preventive measure against the Covid-19 virus in Male’ city.

The government has previously noted that some migrant workers in the country were living in congested and disparaging conditions which may be prone to a risk of disease spread.

The work to move the migrants are being conducted by the National Emergency Operations Center (NEOC) and Maldives Immigration. Maldives Police Service, Maldives National Defense Force, Male’ city council, Housing Development Corporation and Health Protection Authority are also involved in the work which was commenced today.

The migrants are to be moved to a special facility in Hulhumale’ which has a capacity of 1000.

The migrants will undergo a period of registration at these facilities and around 200 are to be moved today. HDC will be in charge of their well-being and food arrangements. Undocumented migrants are also to be moved to the facility where they will be regularized.

Immigration has stated that the migrants would not face any difficulties in attending to work from these facilities and a special pass will be issued to workers to enter and depart the facility.

Immigration has previously said that some migrants were living in large numbers in small quarters in the capital and the duration of their stay in the facility in Hulhumale’ is not known yet.

Govt. open for four days per week until end of June