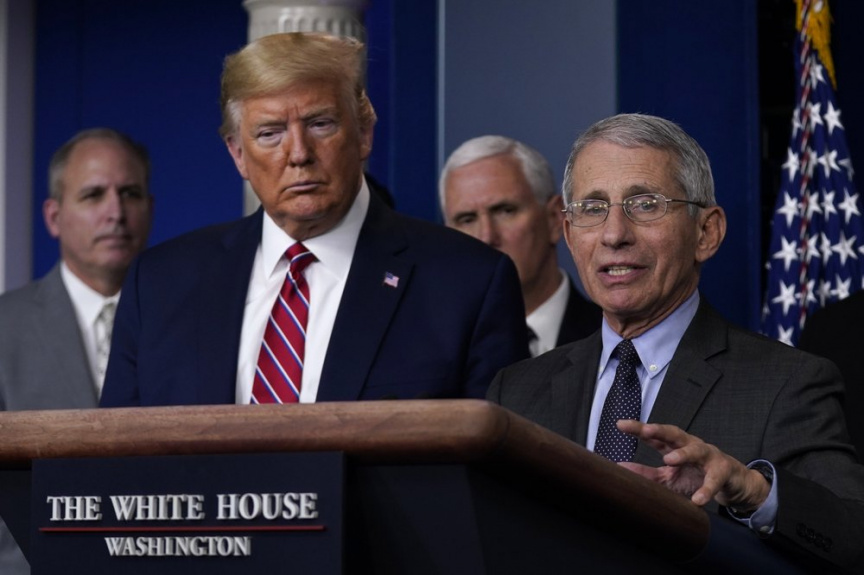 NEW YORK (AP) — Coronavirus deaths mounted with alarming speed in Spain, Italy and New York, the most lethal hot spot in the United States, while the outbreak has thrown 10 million Americans out of work in just two weeks and by Friday had sickened more than a million people.

The public health crisis deepened in New York City, where one funeral home in a hard-hit neighborhood had 185 bodies stacked up — more than triple normal capacity. The city has seen at least 1,500 virus deaths.

Worldwide the number of reported infections hit another gloomy milestone — 1 million, with more than 53,000 deaths, according to a tally kept by Johns Hopkins University. But the true numbers are believed to be much higher because of testing shortages, many mild cases that have gone unreported and suspicions that some countries are covering up the extent of their outbreaks.

Spain on Thursday reported a record one-day number of deaths, 950, bringing its overall toll to about 10,000, despite signs that the infection rate is slowing. Italy recorded 760 more deaths, for a total of 13,900, the worst of any country, but new infections continued to level off.

France recorded a running total of about 4,500 deaths in hospitals, with 471 in the past day. But officials expect the overall toll to jump significantly because they are only now starting to count deaths in nursing homes and other facilities for older people.

France’s Prime Minister Edouard Philippe said he and his government colleagues are “fighting hour by hour” to ward off shortages of essential drugs used to keep COVID-19 patients alive in intensive care.

As the death toll grew, so did the economic fallout. New unemployment numbers showed the outbreak has thrown 10 million Americans out of work in just two weeks in the swiftest, most stunning collapse the U.S. job market has ever witnessed.

Roughly 90% of the U.S. population is under stay-at-home orders, and many factories, restaurants, stores and other businesses are closed or have seen sales shrivel. Economists warned unemployment would almost certainly top those of the Great Recession a decade ago and could reach levels not seen since the Great Depression in the 1930s.

“My anxiety is through the roof right now, not knowing what’s going to happen,” said Laura Wieder, laid off from her job managing a now-closed sports bar in Bellefontaine, Ohio.

The pandemic will cost the world economy as much as $4.1 trillion, or nearly 5% of all economic activity, the Philippines-based Asian Development Bank, said Friday.

At least a million people in Europe are estimated to have lost their jobs over the past couple of weeks. Spain alone added more than 300,000 to its unemployment rolls in March.

But the job losses in Europe appear to be far smaller than in the U.S. because of countries’ greater social safety nets.

Estimates of those in China, the world’s second-largest economy, who have lost jobs or are underemployed run as high as 200 million. The government said Friday it would would provide an additional 1 trillion yuan ($142 billion) to local banks to lend at preferential rates to small- and medium-sized businesses that provide the bulk of employment.

With more than 245,000 people infected in the U.S. and the death toll topping 6,000, sobering preparations were underway. The Federal Emergency Management Agency asked the Pentagon for 100,000 body bags because of the possibility funeral homes will be overwhelmed, the military said.

The Trump administration was formalizing new guidance to recommend Americans wear coverings such as non-medical masks, T-shirts or bandannas over their mouths and noses when out in public and preserve medical masks for those on the front lines.

But there are still shortages of critical equipment, including masks, in Europe and the U.S.

Gov. Andrew Cuomo warned that New York could run out of breathing machines in six days. He complained that states are competing against each other for protective gear and breathing machines, or are being outbid by the federal government.

Trump invoked the Defense Production Act in hopes of boosting production of medical-grade masks by Minnesota-based 3M to assist first responders. Washington is also trying to crack down on a growing black market for protective medical supplies.

Nine leading European university hospitals warned they will run out of essential medicines for COVID-19 patients in intensive care in less than two weeks.

For most people, the coronavirus causes mild or moderate symptoms, such as fever and cough. But for others, especially older adults and people with health problems, it can cause severe symptoms like pneumonia.

In a sign of the outbreak’s impact on the U.S. military, the captain of a Navy aircraft carrier facing a growing outbreak of the virus was fired by Navy leaders who said he created a panic by sending his memo pleading for help to too many people. Navy Secretary Thomas Modly says the ship’s commander, Navy Capt. Brett Crozier, “demonstrated extremely poor judgment” in the middle of a crisis.

Elsewhere among the world’s most vulnerable, aid workers were bracing for a possible outbreak among more than 1 million Rohingya Muslim refugees living in cramped camps in Bangladesh.

And in a move likely to anger China, officials from the U.S. and Taiwan, the island claimed by Beijing as its own territory, held a virtual meeting Sunday to discuss ways of increasing Taiwan’s international participation, particularly in the World Health Organization from which it is excluded at China’s insistence.