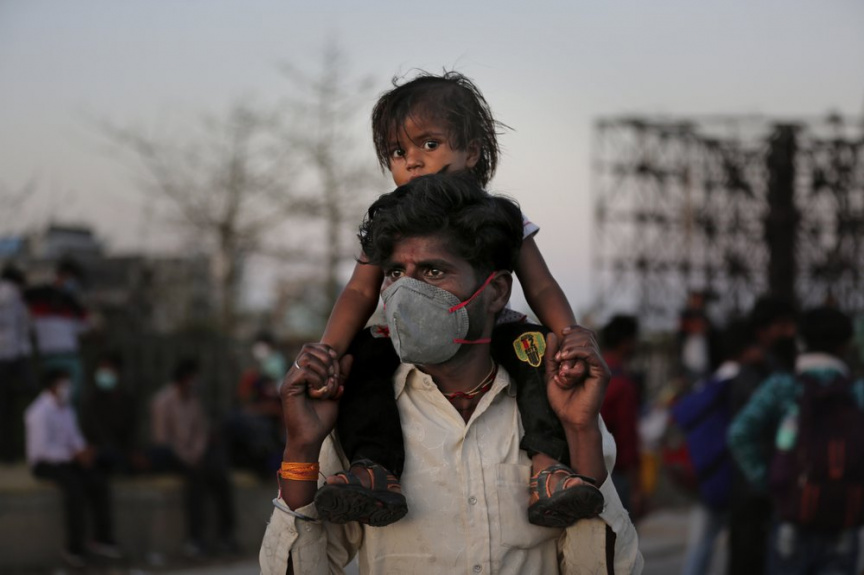 An Indian migrant worker carries a child on his shoulders as they wait for transportation to their village following a lockdown amid concern over spread of coronavirus in New Delhi, India, Saturday, March 28, 2020. (AP Photo/Altaf Qadri)

NEW DELHI (AP) — Indian Prime Minister Narendra Modi apologized to the public on Sunday for imposing a three-week national lockdown, calling it harsh but “needed to win” the battle against the coronavirus pandemic.

“I apologize for taking these harsh steps that have caused difficulties in your lives, especially the poor people,” Modi said in his monthly address, broadcast by state radio. “I know some of you will be angry with me. But these tough measures were needed to win this battle.”

The unprecedented lockdown order, which came into effect on Wednesday to keep India’s 1.3 billion people at home for all but essential trips to places like markets or pharmacies, is meant to prevent the spread of the virus from surging and overwhelming India’s already strained health care system.

Indian health officials have confirmed 867 cases of the coronavirus, including 25 deaths. Experts have said local spreading is inevitable in a country where tens of millions of people live in dense urban areas in cramped conditions with irregular access to clean water.

The lockdown has caused tens of thousands of people, mostly young male day laborers but also families, to flee their New Delhi homes, and has effectively put millions of Indians who live off daily earnings out of work.

Modi said Sunday that he had “no choice but to make these decisions to fight the coronavirus.”

The lockdown — the world’s largest — risks heaping further hardship on the quarter of the population who live below the poverty line.

Rickshaw drivers, itinerant produce peddlers, maids, day laborers and other informal workers form the backbone of the Indian economy, comprising around 85% of all employment, according to official data. Many buy food with the money they make each day and have no savings to fall back on.

Untold numbers are now out of work, and many families have been left struggling to eat.

The governments of New Delhi and the neighboring state of Uttar Pradesh have arranged buses to bring the migrant workers back to their home villages.

At Anand Vihar bus terminal, on New Delhi’s eastern side bordering Uttar Pradesh, a long stream of people waited Sunday to pass through a metal detector and cross the bridge to Uttar Pradesh. Many men were making the journey in flip flops. A young man was on crutches.

Many people carried belongings in plastic bags normally used for cement, while women in saris carried infants on their hips. The orderly line of people suddenly devolved into a crush when authorities signaled that more people could cross the bridge.

A group of friends from New Delhi distributed plates of hot food from a giant pot in the back of their truck to migrants in buses.

R.K. Sharma, 53, a carpenter going to his native home in eastern Jharkhand state, carried water, cooking vessels, a blanket and a mat. Even if he is not able to board a bus, he said he would make it on foot in two or three days, highlighting the determination of the workers to overcome the difficulties they are facing.

“Its not so long a distance,” Sharma said. “I’ll reach in two or three days.”