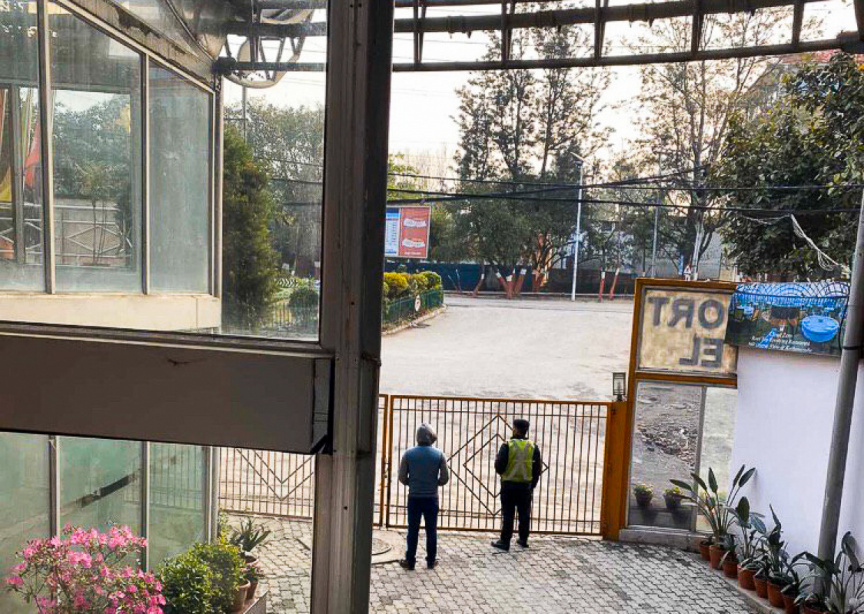 View from a hotel in Katmandu, Nepal, where 14 Maldivians are stranded, following closure of Nepal's borders.

17 Maldivian nationals in various Nepalese cities had gathered in the capital Katmandu to board a plane back to Maldives on Saturday, March 21; among them, medical interns, medical students, and doctors training to specialize who had answered the Maldivian government’s call for all medical and health professionals overseas to return to Maldives and join the national emergency response efforts to combat the COVID-19 pandemic. All were left stranded after Nepal closed its borders on Tuesday, March 24, the same say they were scheduled to board a plane back to Maldives.

While the lockdown order had initially been for only one week, the Nepalese government is currently in talks to extend the lockdown until April 13.

14 Maldivians stranded in a closed down hotel

Of the 17 Maldivians; 7 are medical interns, 6 are doctors training to specialize, two are medical students, and two are family members of a student.

14 are now in closed down hotel located near the Katmandu Airport, while another student long with two family members are in another area.

“This hotel has been closed down too. This hotel, even if it’s called a hotel, is very basic. There’s no way to cook or do laundry. They allowed us to stay out of the goodness of their heart. We only wanted a roof over our heads at that point,” said one student.

While there’s no way for them to cook at the hotel, they also face uncertainty over whether they will be able to get enough food.

They are at the hotel because they have no other option.

“Some students came here [to the airport] after long travel. It isn’t safe to go back. We don’t know when the lockdown will be lifted. We are in a state of uncertainty. We are hopeless,” said another student.

They plead to return home, as soon as possible

Foreign Minister Abdulla Shahid, in a tweet on Wednesday, March 25, said that he had reached out to his Nepalese counterpart, Pradeep Gyawali, regarding bring home the 17 Maldivians.

The students in Nepal said they were appreciative of the government’s efforts to secure their return home. While government officials are in constant contact with students, they remain hopeless.

Remaining in Nepal waiting for the lockdown to be lifted is unbearable, they said.

“We are receiving cooperation from the government. But we have yet to receive any assistance. We want to return to Maldives as soon as possible. And that remains our request to the government. We can return ourselves once the lockdown is lifted. But this the time for the government to provide its assistance,” said one student.

When asked whether they required any other form of assistance, they responded that they simply wished to return home to Maldives, as soon as possible.

“We don’t know when the bordered will be reopened. This is when we require government assistance the most. Not after the borders are reopened,” said one student.

The scenario the President was warned about, has already come into play

At a press conference on Wednesday, March 25, President Ibrahim Mohamed Solih provided assurance that if a time came when evacuating Maldivians overseas became imperative, the government would make the necessary arrangements.

“I have received reports the situation will be very grave when COVID-19 spreads in Nepal. We are working on evacuating them before that happens,” said the President.

The students said the situation in Nepal was already grave, and continued to escalate.

“The situation here is getting worse with each passing day. There are food shortages. Now when will this ‘situation’ happen? It cannot get any worse than this,” said one student.

Negotiations with other foreign countries to evacuate the students

Government spokesperson Mabrouq Azeez said the government was also engaged in negotiations with other foreign countries to evacuate the students in Nepal.

The negotiations have yet to make any headway.

The physical and mental condition of the students stranded in the hotel continues to deteriorate. Some are close to the expiration of their visa, further elevating their anxiety.

“With each passing day, the mental and physical condition of even the strongest person will gradually deteriorate, with the continued exposure to this situation. This will create more issues,” said a student.