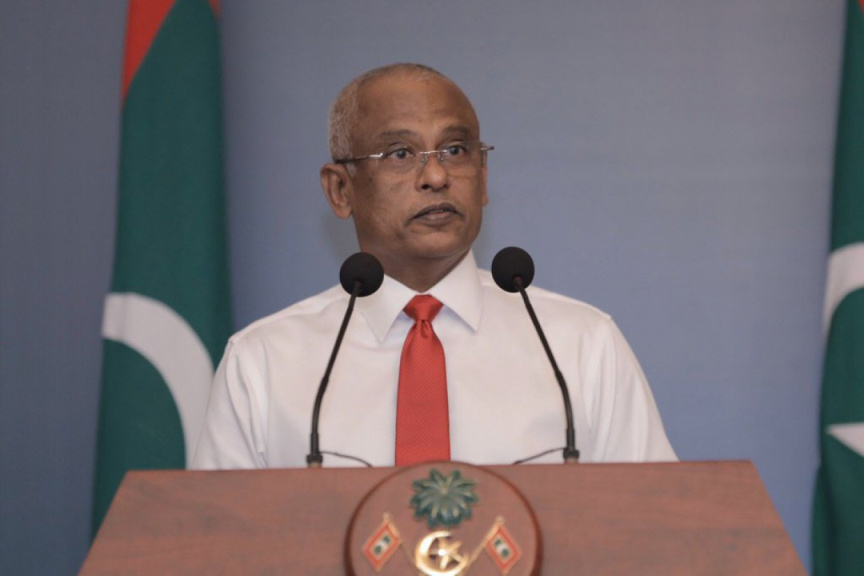 President Ibrahim Mohamed Solih is pictured speaking at a press conference on March 25, 2020. At the conference, President announced that easements are to be brought to internet services in the country in light of the situation with the Covid-19 virus. (Photo/President's Office)

President Ibrahim Mohamed Solih met with reporters for the first time since the country confirmed cases of the Covid-19 virus.

The president also expressed his immense gratitude to health professionals working in the field to contain the virus as he began to address the nation in the press conference today. As soon as the virus was identified in China, the government had listened to the advice and recommendations of the health professionals in the country and would remain as the policy followed by the government.

“The first and the final say in this would be by the medical professionals. What the government will do is, to pave the way to implement the advice of them.” Said the President.

President Solih requested the citizens to heed the advice of the medical professionals and remain at home during this time.

“They (medical professionals) are working for you. What you can do is, refrain from going outdoors, and stay at home.” Said the president.

The president noted that the measures to prevent the virus would cause some disruptions to public life but was only done to ensure the safety of everyone. The government has so far implemented stringent measures after the announcement of a public health emergency in the country on March 12.

The president today announced additional measures, including the closure of schools colleges and universities in the country for an additional week. The government will also be closed during this time. Government offices will reopen on April 5. The Maldives will also stop issuing an on-arrival visa starting from next Sunday.

A speech full of hope and unity, the president assured the public that this was a crisis that can be overcome by the country. The president announced new measures set to alleviate the pressure from the public as well.

In addition to this, the president stated that the government was working to conduct charter flights, should the country face any shortages of fruits and vegetables. The country also had enough staple foods for ten months and each island also had enough for one month.

The country could also be reopened to the South East Asia region and China by the end of April, said the President who noted that discussions were underway with China to find convenient ways of repaying the loans obtained by the Maldives.

The Maldives has confirmed 13 cases of the Covid-19 so far. The president announced today that a further three had recovered from the virus, bringing the total number of recoveries in the country to eight.

Employee arrested for threatening to burn down resort