Nasheed: Relief for election delay to be found through parliament, not courts 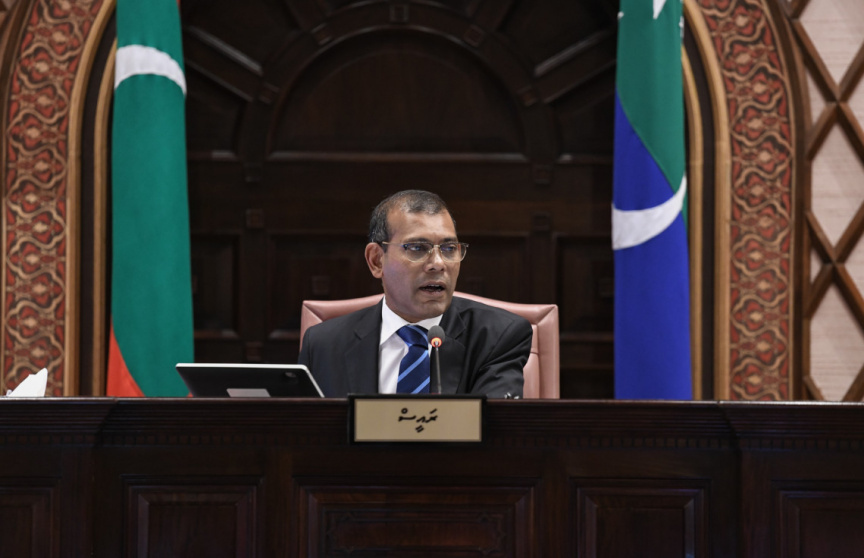 Speaker of the parliament Mohamed Nasheed has said that relief for the problems stemming from the postponement of the local council elections, scheduled for April 4 initially, can be found through the parliament and not the courts of the country.

The elections have been now postponed for April 18, the extent to which the Elections Commission can delay legally. The commission has also filed with the courts to further delay the elections, due to the situation with the Covid-19 virus in the country. The case initially filed with the High Court, requests to delay the election without a date and to allow adequate time to arrange the election if the Health Protection Agency reverts the situation in the country back to normal from the declared public health emergency.

The case was later retracted by the Commission and filed with the Supreme Court.

While the date of the elections is in doubt, the terms of current councilors will expire on June 3. This has led to concerns from some MPs. MP Ali Niyaaz for Hulhumale’, speaking in the parliament today, said that it was not possible for courts to extend the terms of councilors. According to the law, an election can only be delayed in case of famine or war. However, MP Niyaz admitted that the situation with the virus in the country meant that elections were not possible and that the country would need time to return back to normal before expressing his support for the move by the Elections Commission.

He noted that while previous decisions were also made in the same manner, these decisions had caused a significant amount of legal challenges, and said that the law should state the procedure to proceed in such a situation.

“So, an election can be delayed by the courts, however, I do not believe that the courts can decide or should decide how to extend this period. I believe that for this, the parliament or the constitution should state how to proceed,” said Niyaz.

Nasheed who was presiding over the parliamentary session then spoke regarding the speech by MP Niyaz. He stated that a report formulated by the parliament’s Judiciary Committee and the Judicial Service Commission regarding the ultra-vires decisions of the Supreme Court made previously had noted that delaying or nullifying an election was not something related to the Supreme Court.

“So, if an election is to be delayed, relief is to be found through this parliament. It is important that the honorable MPs deliberate on this point at this time,” said Nasheed.

He also noted that a date to overcome the situation with the virus must also be known when delaying the election. Citing the epidemiological survey of the country, Nasheed said that it is estimated that this process will take about four months.

“So, I also view that the date in delaying the election, and the work surrounding it, is part of the honorable MPs responsibilities and your thoughts,” said Nasheed.