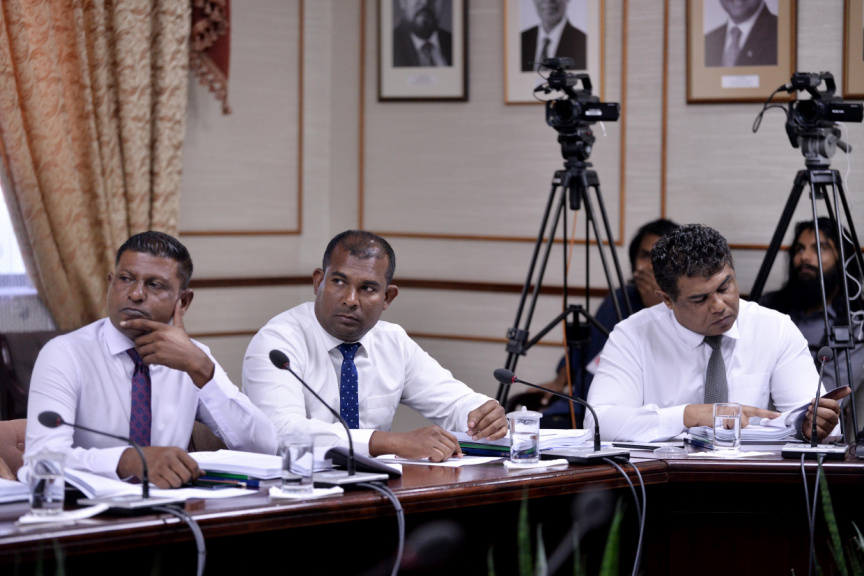 Governing MDP MPs on the parliamentary Committee on Economic Affairs has described the report formed by the minimum wage board to advise the Economic Ministry on the matter as incomplete.

Board members were summoned to the committee which is reviewing the report.

Entrepreneur and representative of the Maldives Association for Tourism Industry (MATI) on the board, Ibrahim Nooradhdheen also said that the main worry of the board was the high amount of money that will be transferred out of the country. He added that while the workforce included a large number of expatriates, the exact figure and their income was not known to the board.

“Without knowing these numbers, it is a risk we are taking that a large amount of money will go out. In reality, when it is formalized (minimum wage is implemented) it might get better. We don’t know, we certainly don’t know whether the unregistered employee is earning MVR 6,400 or MVR 15,000.” said Nooradhdheen who also sits on the board of Maldives Airports Company Limited (MACL).

Ali Adam, who works in the HR department of Universal Enterprises, and represents employees on the board, also reiterated the difficulties in obtaining information, especially from small and medium enterprises.

“It was a huge challenge that good labor market research was not available during this period,” said Ali.

Adnaan Haleem, who is the secretary-general of the construction industry’s Federation of Maldivian Employers, said that the main responsibility of the board was to advise the minister on creating a minimum wage, which, if not acceptable could be sent for review by the minister.

“I think we have to use that opportunity (reviewing the advice). Conduct new surveys and calculations. Right now, it is what we accomplished in four months. We couldn’t conduct a survey of the whole country. It was difficult to decide on the previously conducted surveys.” said Adnaan who is also the secretary-general of the Maldives National Association of Construction Industry.

Milandhoo MP Ali Riza said that the report was formed based on data that was collected before 2014. The total population of locals, expatriates, resort employees, and the number of employed people must also be known when setting a minimum wage for the whole economy. He questioned whether setting a minimum wage without this data was a wise move.

Minimum wage board chairperson Mariyam Khaalidha disagreed with this assessment by MPs. She said that the report was formed within the available timeframe and on the currently available information, which makes it a complete report to set a minimum wage for now. She did, however, admit that with the inclusion of more data, the report could have been better.

She added that the surveys were conducted with the International Labor Organization (ILO).

“For instance, if we wanted to know how much a person spends? We didn’t refer only to the data we have, we visited shops to find out that. So, it cannot be said that this report is formed without information,”

“We can get additional information, and make it better. But for now, it cannot be said that the report is inadequate to set a minimum wage for now,” said Khaalidha.

She also noted that the decision was made unanimously by the board and no members have a reason to be unhappy with the decision.

The committee meeting today, concluded without an opportunity for opposition party members due to a lack of time. Committee chair and Alifushi MP Mohamed Rasheed Hussain said that another meeting would be scheduled with the board where opposition MPs would be allowed to speak on the matter.

The board had decided that MVR 6,400 as a national minimum wage and a figure between MVR 6,400-8,600 for civil servants and tourism industry employees.