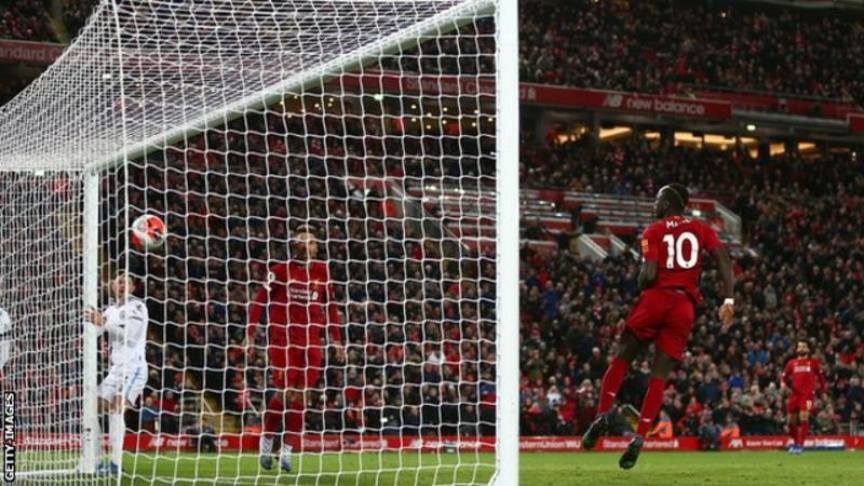 Liverpool winger Sadio Mane is seen jumping after heading the ball towards the goal in the match against West Ham on February 25, 2020. (Photo/BBC/Getty Images)

Liverpool survived a night of struggle to overcome a stubborn West Ham United and close to within just four wins of the League title.

Former Arsenal keeper Lukasz Fabianski who was in goal for West Ham had a night to forget as he suffered an Anfield nightmare.

The Reds last dropped points in a 1-1 draw with Manchester United in October.

West Ham did threaten to inflict a first league defeat on Liverpool this term when they led midway through the second half.

Hoever, it was Liverpool that took an early lead when Fabianski failed to deal with a routine Georginio Wijnaldum header. West Ham then showed great character to hit back through Issa Diop's header, which the usually reliable Alisson could have dealt with better.

West Ham substitute Pablo Fornals then swept his team into the lead nine minutes after the break and Liverpool were faced with an uphill fight to preserve their unbeaten 27-match league run.

In a poor display by their standards, Liverpool were in luck as Fabianski was the culprit again, inexplicably allowing Mohamed Salah's shot to run through his legs in the 68th minute.

There was a sense of inevitability as Liverpool went for victory and so it proved as Sadio Mane turned in with nine minutes left after Trent Alexander-Arnold lofted the ball over Fabianski.

With the win, Liverpool have restored their 22-point lead at the top and the Hammers are left in the bottom three.

Bale turns back time as Man U and Chelsea draw