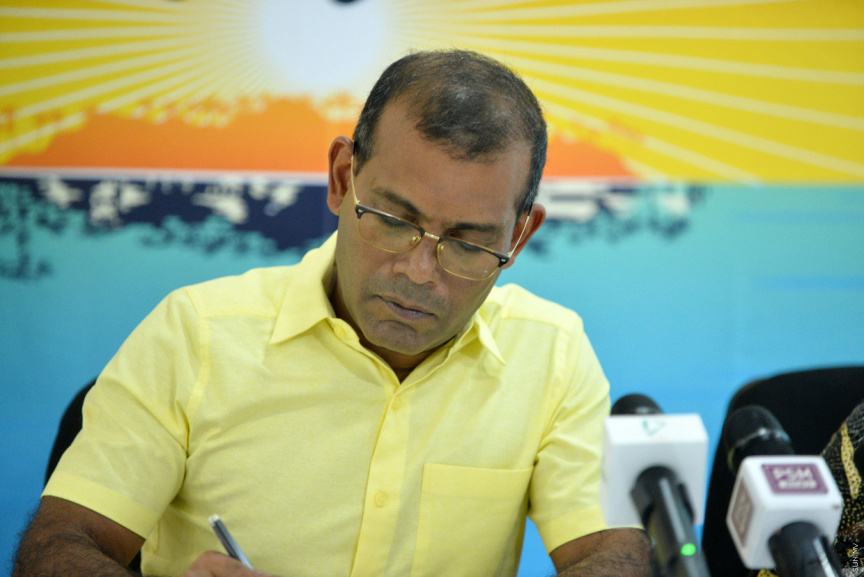 MDP leader, former President Mohamed Nasheed, on Saturday, said that while he acknowledged the low showing at the party’s Rahvehi Fathis campaign launch event, he had not doubt the party would take all seats at the Male’ City Council in the upcoming elections.

MDP launched its Rahvehi Fathis campaign in a ceremony at the Alimas Carnival on Friday night.

Nasheed, who also serves as Speaker of the Maldivian Parliament, addressed the criticism against MDP over the low showing at the campaign launch event in a press briefing regarding the party’s elections preparations on Saturday morning.

Nasheed said that MDP had over 15,000 registered members and over 35,000 supporters from Male’, and therefore acknowledged that the number of people who had showed up for Friday night’s event had been low.

He said that he also acknowledged that the government and MDP itself had made a lot of promised to Male’ residents, which they had yet to deliver to the desired extent.

He said that the failure to resolve the housing crisis, the MMPRC corruption scandal, and the cases of victims of murders and enforced disappearances may have contributed to the low showing at the event.

“I believe there are a lot of complaints in Male’. But I believe it’s also very clear to Male’ residents that they will need to come to us with these complaints, and that it is us who will offer remedies,” said Nasheed.

He said that every political party always had room for improvement, and that the issues which require improvement were being addressed within the party.

Opposition parties claimed the low showing at Friday night’s event as a sign of MDP’s dwindling popularity among the Maldivian people.

However, Nasheed said that the people may harbor resentment or concern over certain issues, it did not mean MDP’s supporters would leave the party.

He said that the local council elections itself had always had a low voter turnout.

He said that MDP’s candidates would discuss such issues with the voters, and that the government and MDP would work together to remedy the issues, and prove it with the election results.

“I believe MDP will win all seats, the 18 seats in Male’ and the mayor seat too, by a huge difference. I have no doubt,” said Nasheed.

He also expressed confidence in the effectiveness of MDP’s internal mechanisms, describing it as an example of 21st century party politics and democracy.

“Yes, I accept there are things which need reform. But we are still exemplary,” said Nasheed.

Maldives, on April 4, will elect 980 councilors to island councils, atoll councils and city councils across the country.

MDP, which is running for 877 seats, had expressed confidence in a decisive victory.

Sunset bill to fill void in law presented to Parliament