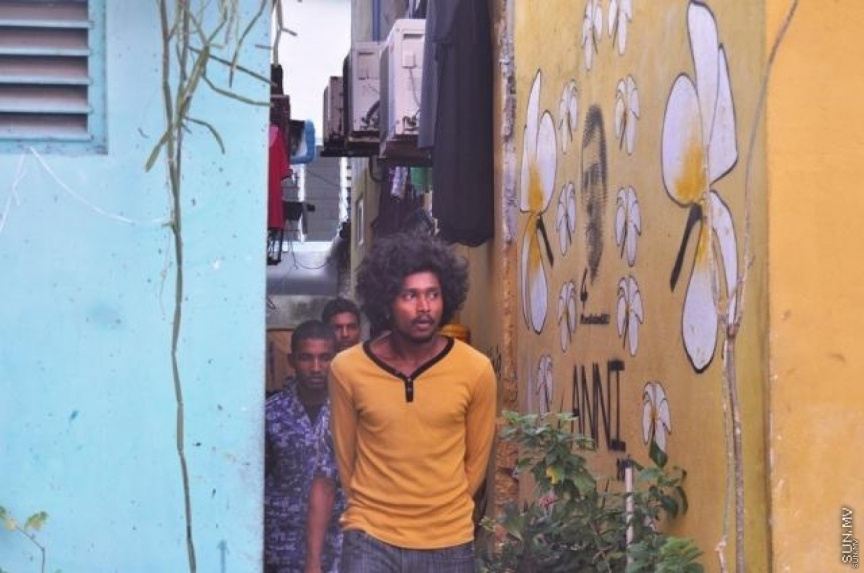 Photo shows Mohamed Midhuhath being arrested and led away by Police. Midhuhath was acccused and later acquitted of terrorism following the murder of Ahmed Mafaaz. Midhuhath passed away after deliberately colliding into another motorcycle in an accident rumored as an act of personal vengeance on February 16, 2020. (Sun File Photo)

“Sun” has confirmed that the 26-year old man killed in a ‘deliberate’ motorcycle collision last night was Mohamed Midhuhath from H. Bluebird who was accused of the murder of Ahmed Mafaaz from Hudhirihi, S. Hithadhoo.

Midhuhath passed away from injuries suffered after ‘deliberately’ colliding with another motorcycle in Buruzu Magu last night.

According to the police, the collision was reported to the agency at approximately 10:28 pm on Saturday and involved two motorcycles which had been headed in the same direction – from east to west on Buruzumage.

One of the motorcycles driven by Midhuhath had deliberately crashed into the other, said the police.

The other motorcycle was driven by a 31-year-old man with a 22-year-old woman in the backseat. Both sustained varying degrees of injuries. The woman was taken to the IGMH Hospital while the man was taken to the ADK Hospital. Neither of the men possessed a driver’s license.

It is rumored that the collision was caused by Midhuhath for an act of personal vengeance, and that the woman on the backseat of the other motorcycle was Midhuhath's former lover.

New bill will allow officers to apply for CP