Liverpool's titles charge marches on with win at Norwich 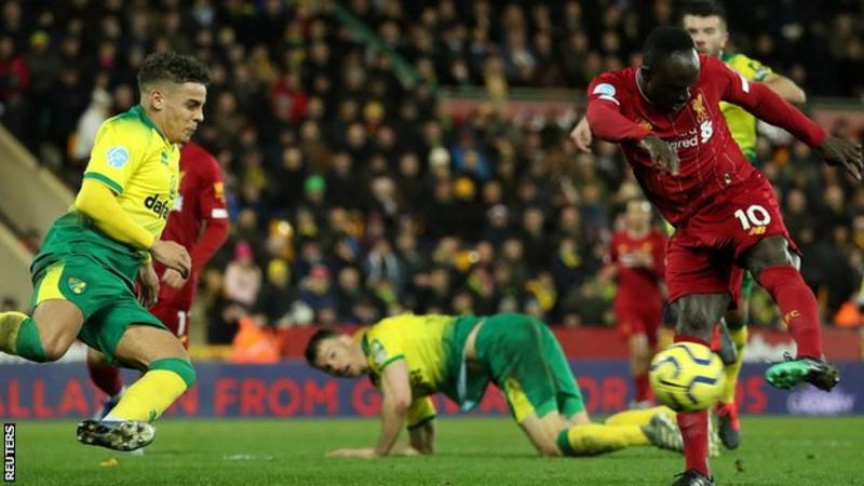 Senegal international Mane, missed the last two games through a hamstring injury as he proved to be the difference after entering the action on the hour mark in the match against Norwich city on February 15, 2020. Mane is seen shooting the ball towards the goal in the 1-0 win over Norwich. (Photo/BBC)

Liverpool's charge towards their first top-flight title in 30 years continued with a narrow win over bottom strugglers Norwich city.

Manager Klopp descrbed the win as "outstanding", as Senegal forward Sadio Mane came off the bench to score the winner with 12 minutes remaining.

It means Klopp's men need just five more wins from their remaining 12 matches to guarantee their first Premier League title. The reds have dropped just two points all throughout the campaign, and are 25 points clear of last year's champions Manchester City.

"The gap is so insane, I don't really understand it," Klopp told Sky Sports. "I am not smart enough. I have not had that before. It is outstanding, so difficult.

"I go back into the changing room and we chat about the things and then I am like 'Oh, but congratulations. We won the game, another three points.'"

Chances were at a premium in a blustery first half, but Liverpool ramped up the pressure in the second period - Canaries goalkeeper Tim Krul making a stunning double save to deny Mohamed Salah's low shot and Naby Keita's close-range follow-up.

Having been pegged back for a long period, Norwich could have scored on the counter-attack as Alex Tettey's strike from an angle caught Alisson by surprise at his near post but the effort rattled the foot of the upright. Mane then came off the bench to expertly take down Jordan Henderson's pass and smash the ball in at the near post.