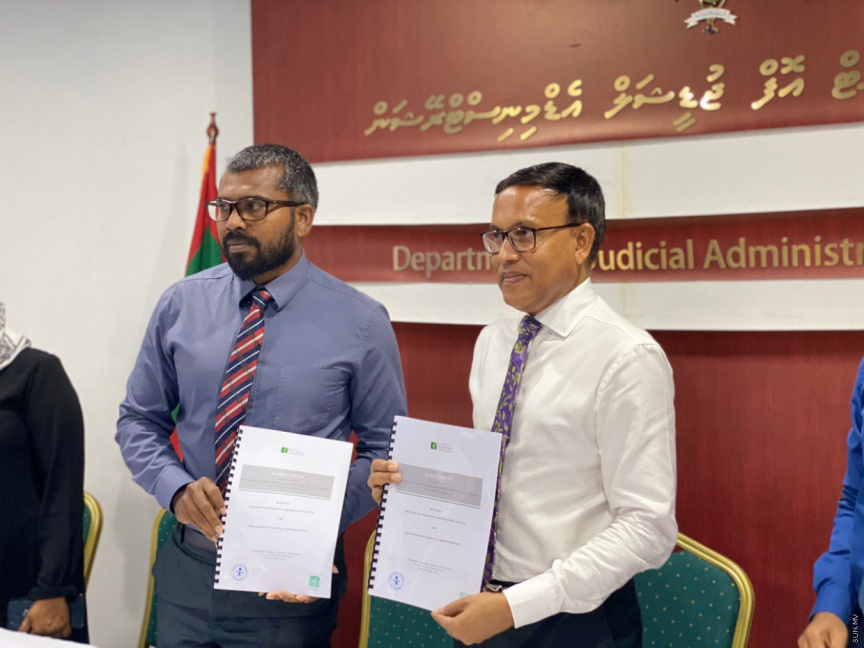 Department of Judicial Administration (DJA) and the Housing Development Corporation (HDC), on Thursday, exchanged documents for the allocation of land from suburban Hulhumale’ to build a court complex.

Phase I of the court complex project involves construction of a 10-story building to house Family Court, Civil Court and Juvenile Court.

DJA has been allocated an approximately 37,000 square feet land space near the Central Park to build the court complex.

Speaking to press following the exchange of documents, Dr. Nazeer said he expected the project to take two years to complete.

“We are looking to move the Civil Court, Family Court and Juvenile Court to the building which will be constructed in the first phase… During the second phase, we will look to create space for the Criminal Court. All the superior courts in Male’ and the High Court will also be moved there,” he said.

He said he expected the rate of hearings held in courts to increase once the courts were moved to the complex in Hulhumale’.

“At present, we don’t have a courtroom for each judge. The new building will be developed to accommodate one courtroom per judge. This will mean multiple hearings can be scheduled simultaneously each day, and the number of scheduled trials will also increase,” said Dr. Nazeer.

While land has now been allocated to relocate the courts out of the congested capital, Male’, the Maldivian government has announced plans to build similar court complexes in the atolls.

DJA is working on laying the foundation stone for the new building as soon as next week.