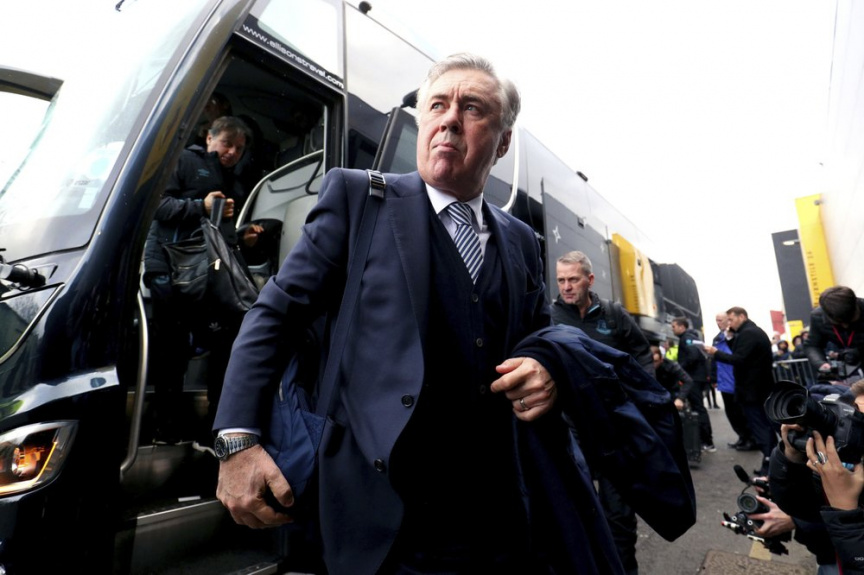 Everton manager Carlo Ancelotti arrives at the stadium ahead of the English Premier League soccer match against Watford, at Vicarage Road in Watford, England, Saturday Feb. 1, 2020. (Jonathan Brady/PA via AP)

Carlo Ancelotti’s priority upon taking over at Everton just before Christmas was to get the team out of relegation danger in the English Premier League.

Now, against all the odds, Ancelotti has a realistic chance to taking Everton into the Champions League, a stage to which he is far more accustomed.

The Ancelotti effect is really kicking in at Goodison Park after Everton beat Crystal Palace 3-1 on Saturday to climb to seventh place and within five points of Chelsea, which occupies the fourth and final Champions League qualification place.

Publicly, at least, Ancelotti has his sights on the Europa League spot currently held by fifth-placed Tottenham, which is just a point ahead of Everton.

“In this moment, we believe in what we are doing and that is the most important part,” said Ancelotti, who has succeeded in making Everton more organized and harder to beat.

“The work everyone has done was really good -- players, club, staff, everyone -- and now the table (looks) good, and we can dream to fight for the Europa League in the next games.”

Under Ancelotti, a three-time Champions League winner as a manager with AC Milan (twice) and Real Madrid, Everton has won five and drawn two of its eight league games -- the only loss coming at Manchester City, 2-1. One of those draws was 2-2 against Newcastle, which scored both of its goals deep in stoppage time.

This latest win wasn’t pretty, with Everton forced to battle back after conceding a 51st-minute equalizer because of a dreadful mistake from goalkeeper Jordan Pickford. The England international let a low shot from Christian Benteke squeeze under his body as he went down for the save, gifting the Belgium striker his first league goal since April.

“It was disgusting,” Pickford said, “and I hold my hands up for that.”

That canceled out an early goal by Brazilian winger Bernard for the hosts, who fought back after Benteke’s strike to score through Richarlison in the 59th and Dominic Calvert-Lewin in the 88th.

Calvert-Lewin is excelling since being anointed the first-choice striker under Ancelotti, his 11 goals the most by an English player for Everton in a single campaign since Andrew Johnson in 2006-07.

While Everton soars up the standings under its new manager, Palace is slumping badly under coach Roy Hodgson.

The team from south London has won only one of its last 11 league games and has dropped to within six points of the relegation zone.

That gap could have been reduced had Watford held onto the 19th-minute lead given to the team by Abdoulaye Doucoure’s fine individual goal against Brighton in the only other game played on Saturday.

However, Watford defender Adrian Mariappa turned a cross into his own net under no pressure in the 78th minute, gifting Brighton an equalizer in a 1-1 draw.

Watford stayed in next-to-last place, a point from safety. Brighton was three points clear of the bottom three.

There are two games on Sunday; Sheffield United at home to Bournemouth, followed by Manchester City at home to West Ham in a 26th round that is split over two weekends during the Premier League’s first midseason break.