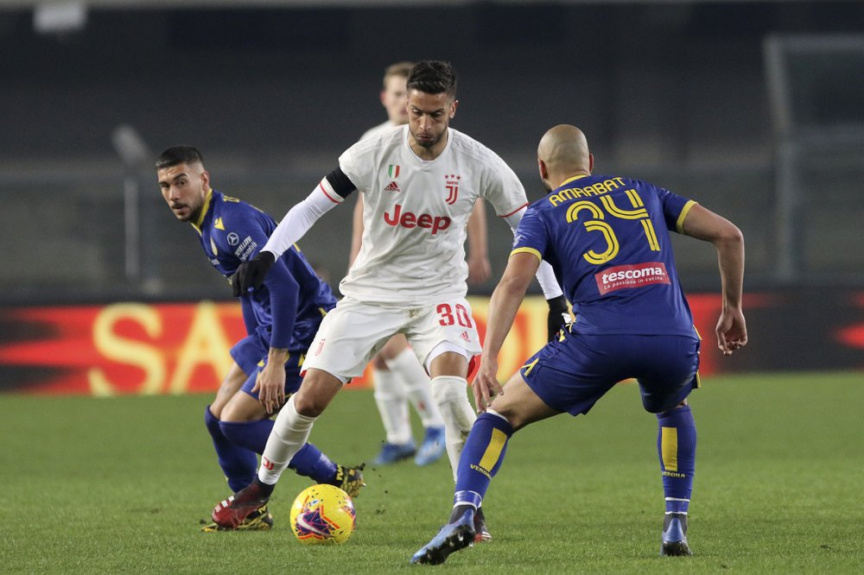 Juventus' Rodrigo Bentancur, center, and Verona's Sofyan Amrabat, right, vie for the ball during the Serie A soccer match between Hellas Verona and Juventus at the Stadio Bentegodi in Verona, Italy, Saturday Feb. 8, 2020. (Paola Garbuio/LaPresse via AP)

The result means Inter Milan can move back level with Juventus if it wins the derby against AC Milan on Sunday.

“We need to understand that winning is not to be taken for granted, it’s difficult,” Juventus coach Maurizio Sarri said. “We need to get into our heads the concept that in order to win you need to fight and get yourself dirty. And not have dips of concentration during the match.

“This team is used to winning comfortably in recent years. At the moment we don’t realize that we can’t afford to waste points. It’s something that we absolutely have to resolve.”

Ronaldo became the first Juventus player to score in 10 successive matches but his goal was cancelled out by Fabio Borini, then Leonardo Bonucci gave away a penalty which substitute Pazzini converted four minutes from time.

“The ball felt quite heavy,” said Pazzini, when asked about that moment.

It capped an impressive week for Ivan Jurić’s side after draws at Milan and third-placed Lazio.

The stadium erupted into cheers at the final whistle and Verona, which was promoted last season via the Serie B playoffs, moved into sixth.

“Everyone deserved a feat like this,” Pazzini said. “The whole team deserves enormous compliments, playing three matches in six days isn’t easy. Not even Jurić believed in something like this.”

Verona thought it had the lead early but the header by Marash Kumbulla, on his 20th birthday, was ruled out for offside after video review.

Ronaldo, who earlier hit the post, gave Juventus the lead in the 65th minute. He started his run from inside his own half, played a one-two with Paulo Dybala in midfield then held off the recovering defender to fire into the bottom left corner.

Ronaldo, who turned 35 on Wednesday, has 15 goals in his past 10 league matches, taking him to 20 for the season.

However, Verona leveled 11 minutes later when Miralem Pjanić attempted to intercept a pass but could only prod it into Borini’s path and he placed an angled drive into the bottom right corner.

Juventus gifted Verona the winner when Kumbulla’s header was deflected on to the crossbar by Bonucci’s raised arm and the referee awarded a penalty after reviewing the incident on the pitchside monitor.

Atalanta came from behind to win at Fiorentina 2-1 and end a 27-year hoodoo.

Atalanta’s first Serie A victory at Fiorentina since 1993 featured Duvan Zapata and Ruslan Malinovskiy scoring in the second half after Federico Chiesa’s opener for Fiorentina.

Atalanta, which qualified for this season’s Champions League for the first time in its history, moved three points above fifth-placed Roma. They face each other next week.

Sampdoria scored three times in nine minutes to come from behind and win at Torino 3-1 as Moreno Longo’s debut as coach ended in defeat.

Torino defender Armando Izzo was sent off 12 minutes from time for pulling back Fabio Quagliarella in the incident which led to the penalty Quagliarella converted.