Minister Imran: Shidhaatha's star in politics is not even close to fading 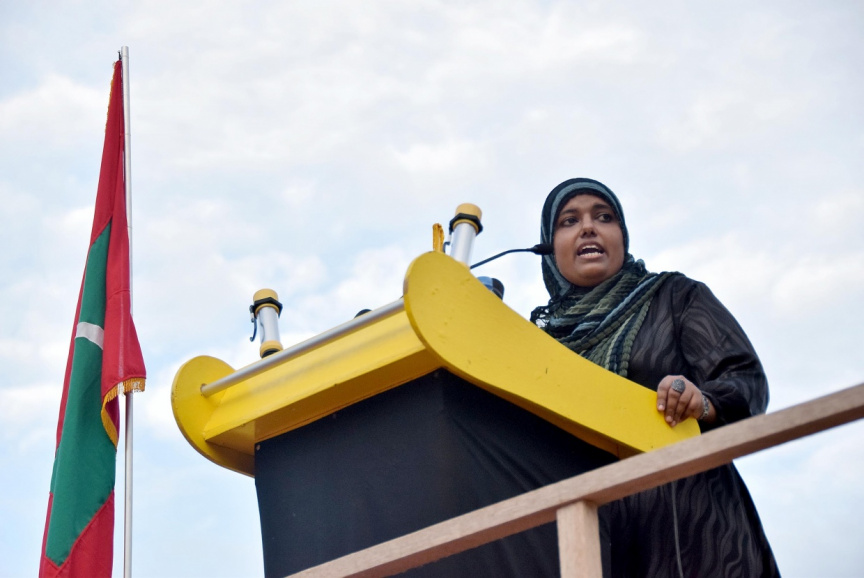 Shidhaatha Shareef is pictured speaking at a podium. She resigned as the Gender Minister on February 6, 2020. (Sun Photo/Yoosuf Sofwaan)

Home Minister Imran Abdulla has stated that the star of the former Gender Minister Shidhaatha Shareef who resigned from the post after succumbing to pressure is not even close to fading.

Shidhaatha has been on the receiving end of heated criticism from the Parliament and the public. A tweet by Adhaalath Party’s leader and Home Minister Imran Abdulla praised Shidhaatha Shareef. Shidhaatha is a member of the Adhaalath Party.

The Home Minister stated that she was a courageous female member in the political history of the country and that her work was priceless.

“By the will of God, the star of Shidhaatha is not even close to fading on the political spectrum of the country,” said Minister Imran who described Shidhaatha as one of the pillars of the political activities of Adhaalath Party.

“What she did for the office and me and the sacrifices she made are more than what can be measured. That is something that cannot be lost, god willing.”

After Shidhaatha had resigned, the President had appointed Maldivians  Ambassador to India Aishath Mohamed Didi to the post. She had served as the Gender Minister during the administration of former President Maumoon Abdul Gayoom.