Lazio forward Immobile scoring at rate not seen in 61 years 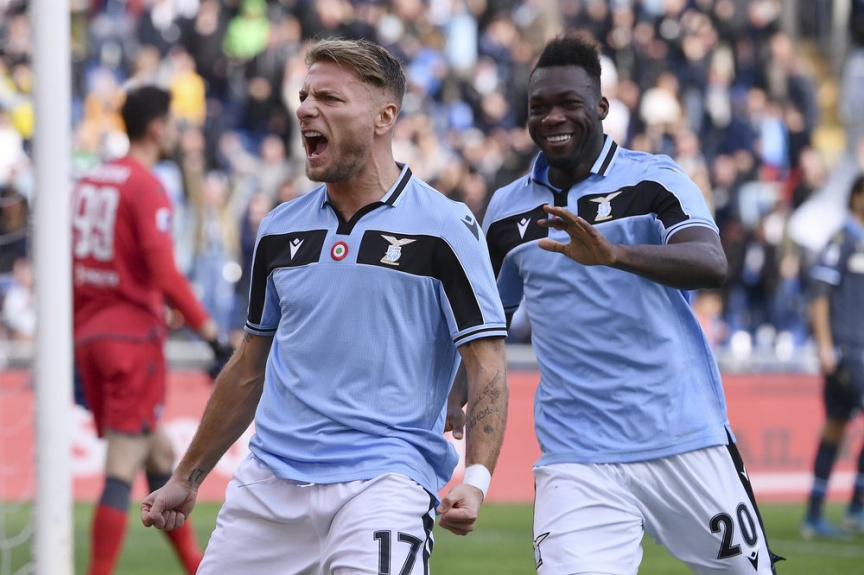 Lazio's Ciro Immobile, left, celebrates after scoring his side's opening goal during the Serie A soccer match between Lazio and Spal, at the Rome Olympic Stadium Sunday, Feb. 2, 2020. (Alfredo Falcone/Lapresse via AP)

MILAN (AP) — Cristiano Ronaldo is not used to being overshadowed, especially when he is emulating records.

The Juventus forward converted two penalties in Sunday’s 3-0 win over Fiorentina to tie a club record by scoring for a ninth straight game.

He has had to share the spotlight with Lazio forward Ciro Immobile, however, who is scoring at a rate not seen for more than six decades.

Immobile also scored twice on Sunday as Lazio routed Spal 5-1, taking his tally to 25 goals this season. No player in league history has scored more through 21 matches. Antonio Valentin Angelillo also had 25 at this point in 1959 for Inter Milan.

The 29-year-old Immobile leads the race for the European Golden Shoe, having scored three goals more than Bayern Munich striker Robert Lewandowski. Ronaldo is fourth on that list — behind Leipzig’s Timo Werner — and his 19 goals leave him second in the Serie A goalscoring chart.

“Certainly it would be really wonderful, but it’s tough,” Immobile said about the record. “But with these teammates and this crowd, we can continue doing well.”

Immobile has scored almost half of Lazio’s goals this season. The team has the second-best attack in the league with 52 goals, seven behind Atalanta.

Lazio is third in the Seria A standings with a game in hand. A home win against Hellas Verona on Wednesday will move the team to second place, one point in front of Inter and two behind leader Juventus.

“The aim is still the same as it was at the beginning of the year, qualifying for the Champions League,” Immobile said. “Then maybe we’re still up there and we’ll fight for the title right until the end.

“In the dressing room we talk about Roma, Atalanta and the other teams behind us who are hoping for a mistake from us,” he said. “But we are good at remaining focused.”

Romelu Lukaku also scored twice at the weekend, but the Inter forward was clearly missing his attacking partner.

Lukaku and Lautaro Martínez have formed a formidable partnership this season, scoring 27 of Inter’s 44 Serie A goals. They set up each other for many of these goals.

Martínez missed Sunday’s 2-0 win over Udinese as he served the first of a two-match suspension following a red card against Cagliari. He will also miss the derby match against AC Milan.

“Aside from his brace, today wasn’t his best match, he can and must do much better,” Conte said. “But Romelu is a decisive player for us. He’s integrated really well and I can only speak highly of him. I’m very happy to have insisted on signing him.”

Lukaku has scored 16 goals in Serie A this season, putting him third in the Italian league’s scoring list.