Remand period of 2 accused of sexual assault of toddler extended 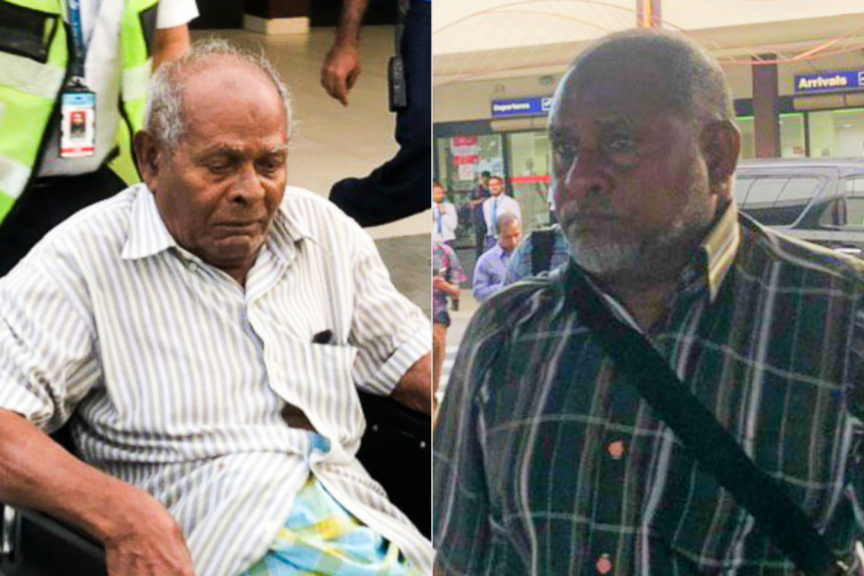 Combined photos of (from L-R) the great-grandfather and grandfather accused of the sexual assault of a toddler as they are escorted out of the Velana International Airport (VIA) under police custody on January 18, 2020. (Sun Photo/Ahmed Azif)

The Criminal Court, on Saturday, extended the remand period of two men accused of sexually assaulting a 20-month girl in G. A. Kanduhulhudhoo to 15 more days.

They are currently being held at the Dhoonidhoo Custodial.

A police spokesperson, on Sunday, confirmed that their remand period had been extended to 15 days by the Criminal Court on Saturday.

The third suspect arrested in the case, the victim’s 33-year-old father, is scheduled to be transported to Male’ for a decision regarding an extension to his remand period later this Sunday.

The father, who has been accused of child endangerment, was arrested from a municipal flat in suburban Hulhumale’ on January 17.

Both the victim’s paternal great-grandfather and grandfather have a history of sexual allegations against them, and the former had even been charged for the sexual harassment of a child years back. According to the authorities, he had been allowed to be released back into the community “out of consideration of his old age”. The 2018 case remains in trial. The family of the victim has accused Kanduhulhudhoo magistrate Hassan Didi, who had been placed under suspension for an investigation into allegations of multiple sexual offenses, of obstructing the trial.

Meanwhile, the grandfather, who had served as a muezzin at the Kanduhulhudhoo mosque, was also placed under suspension following his arrest.

The parents of the victim hold records for substance abuse, and the victim has been placed into the custody of her maternal grandmother.