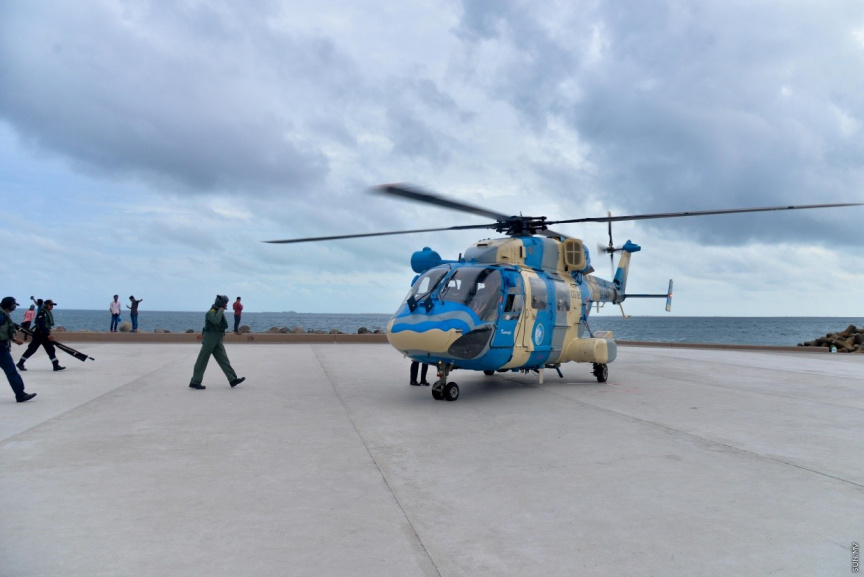 Photo shows one of the two helicopters donated by the Indian government to the Maldives in 2010. (Sun Photo/Mohamed Afrah)

Defense Minister Mariya Ahmed Didi has said that migrants in the country pose a bigger threat to national security than Indian army pilots who operate two helicopters in the Maldives.

Around 50 Indian army personnel including pilots and technical staff are in the Maldives to operate the two helicopters donated by India to the Maldives. This has been a point of concern by the opposition parties who claim that this is an infringement and danger to Maldivian independence.

Minister Mariya responded to the claims that foreign military personnel was involved in Maldivian armed forces on the “Fala Surukhee” program of Raajje TV last night when she said that India had no military bases in the country and that the claims were just regarding the helicopter pilots and staffs of India.

The purpose of the helicopters was to transport patients in need of medical care, aid and assist in search and rescue operations at sea and other humanitarian works. Purposes that Maldivians are thirsty for, according to the Minister.

The Minister then stated that the Maldives did not have the financial capability to purchase and operate its helicopters and noted that it was more important to provide the necessary services to the people than to spend and operate its own fleet of helicopters.

“It is a huge cost if a helicopter is to be placed at a location from our own resources for a need by our citizens. It is a useful reason but we do not have the financial capabilities for that. We have more fundamental things to do.” said Mariya.

For this reason, the Minister noted that it was best to get the help and assistance of others if it was available. She also noted that the Indian personnel were not housed in a base in the country, but rented their own accommodations and lived close to the people of Maldives.

The Minister noted that undocumented immigrants in the country posed a bigger danger.

“There is an alarming number of people, extremely concerning. Migrants of different natures that people in the MNDF and security sector might designate as a security risk are living in the Maldives,” said Minister Mariya.

The Minister noted that it was disappointing to see opposition members speak in a manner that might detriment a convenience the country has from another country. MNDF also has the intention to conduct joint operations with the availability of local pilots to operate the helicopters.

The helicopters were first brought to the Maldives in 2010. One of the helicopters is based in Addu city, while the other is in L. Gan.

'Trade will thrive in Addu with new Customs office'