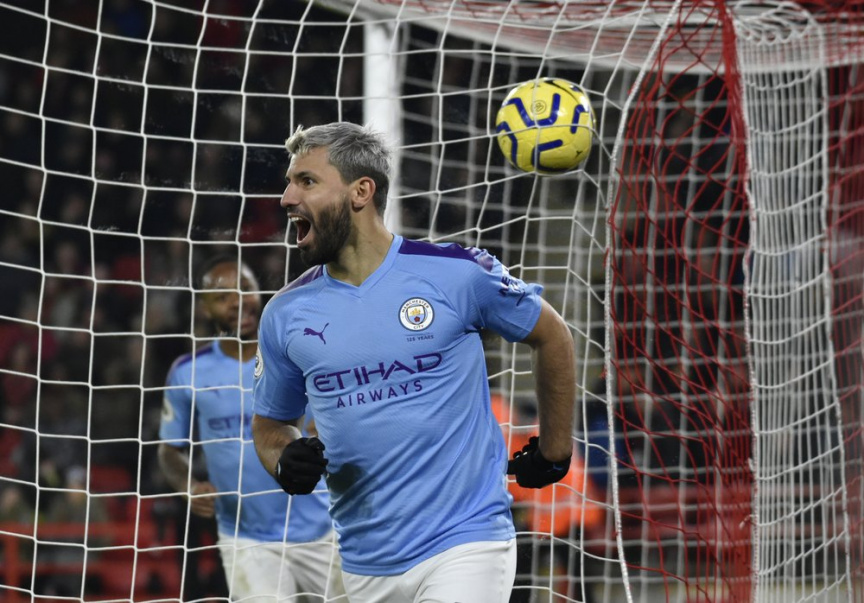 SHEFFIELD, England (AP) — Sergio Aguero came off the bench to score a sixth goal in his last three Premier League games and earn Manchester City a 1-0 win over Sheffield United on Tuesday.

The Argentina striker tapped in at the far post in the 73rd minute following another perfectly weighted cross from Kevin De Bruyne, giving the Belgian his 15th assist of the campaign.

Aguero had come on six minutes earlier as a substitute for Gabriel Jesus, who had a first-half penalty saved by Dean Henderson.

As important as the victory for City was the return of France center back Aymeric Laporte after nearly five months out with a serious knee injury.

Laporte, City’s best defender, was roughed up by Sheffield United’s players - the Frenchman was taken out by Mo Besic in a dangerous tackle and then elbowed to the ground attempting to defend a corner, both in the first half - but left the field in the 78th minute with City’s clean sheet intact. City manager Pep Guardiola gave him a pat on the back.

“We have missed him a lot,” Guardiola said. “Imagine any of the best teams in the world lose their best central defender.

City has struggled defensively in Laporte’s absence, with central midfielder Fernandinho having to drop back to marshall the back line.

Guardiola decided to protect Laporte by playing him in a five-man defense along with Fernandinho and Nicolas Otamendi.

“For the way we want to play, it’s so important. Apart from his mentality and character, he has all the attributes and when he’s fit for me he’s the best left-central defender in the world.”

Aguero is going through a midseason revival, having scored a hat trick against Aston Villa before netting two late goals in a draw with Crystal Palace last weekend.

He now has 16 goals in the league this season, putting him one behind top scorer Jamie Vardy of Leicester.