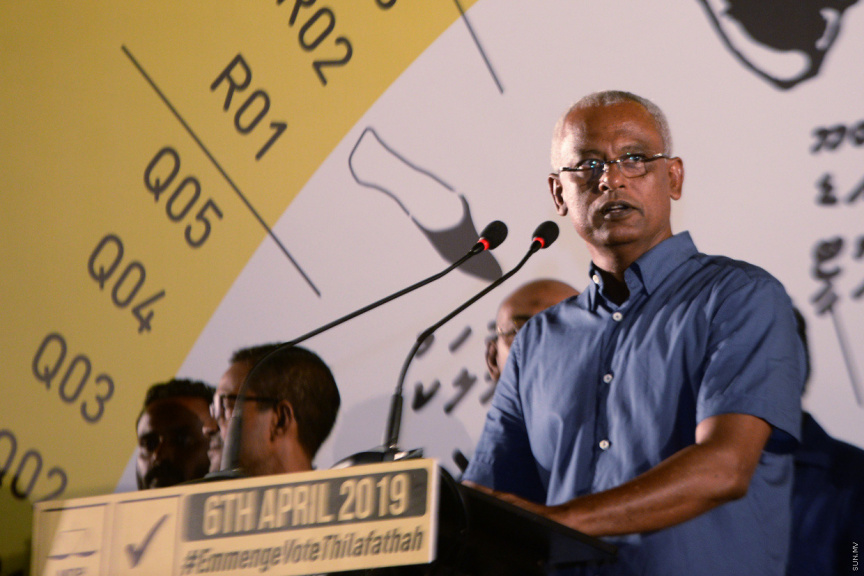 President Ibrahim Mohamed Solih says that speedy progress of projects planned for development of local islands, and the speed of national development desired by the Maldivian people required holding the three national elections together.

He made the remark on Tuesday, at a Maldivian Democratic Party (MDP) campaign event in H. Dh. Nolhivaram.

“One of the main reasons I see for this is that the elections are held separately. We need, at some point, to attempt to hold these three elections together in a single day. Otherwise, it’s causing certain delays in running certain things,” said the President.

He said that following the MDP election victory in the 2018 presidential elections, he had to spend the next five months engaged in the campaign for the 2019 parliamentary elections, because it had been necessary for MDP to gain a majority in the Parliament.

And now 10 months after the parliamentary elections, I now have to free my schedule to engage in the campaign for the local council elections, he said.

“Instead of this, we must employ wisdom. Holding all the elections together in one specific period of time will quicken the pace of our efforts towards national development,” said the President.

He repeated his concern over the delay in national development projects again in the campaign stop in H. Dh. Vaikaradhoo.

He added that while questions over the integrity of bidding processes for government projects needed to be looked into, it sometimes resulted in suspension of projects at the orders of the Anti-Corruption Commission (ACC) for thorough investigations.

He said that lengthy investigations and resultant halts in projects were issues of deep concerns, and that no party should become an obstacle to developmental projects.

“It sometimes stretches out to one month. And then they clear the project and give the go ahead to proceed with it. I feel this needs a slight change. Things need to be looked into. If there’s a wrongdoing, it must be advised that we rectify it. But no one should become an obstacle to projects,” said the President.

The remark comes after the ACC expressed concern over decisions by the government to award projects to private parties without an open bidding process, including the decision to award land reclamation in preparation for relocation of the Male’ Commercial Port to K. Gulhifalhu and the decision to award the electricity project in Addu City to a Chinese company – both of which took place without an open bidding process.

Article 10.27 (b) of Public Accounts Regulations empowers the President, with counsel from the Cabinet or a Cabinet committee, to award projects run with grant assistance from a foreign nation or under a concessional loan without an open bidding process.

This provision is contested by the ACC, which, following risk analysis, found that it opened room for corruption, and was being exploited by institutions for undue benefit to specific parties.

ACC has advised the State to quash the loophole, and revise the provision.