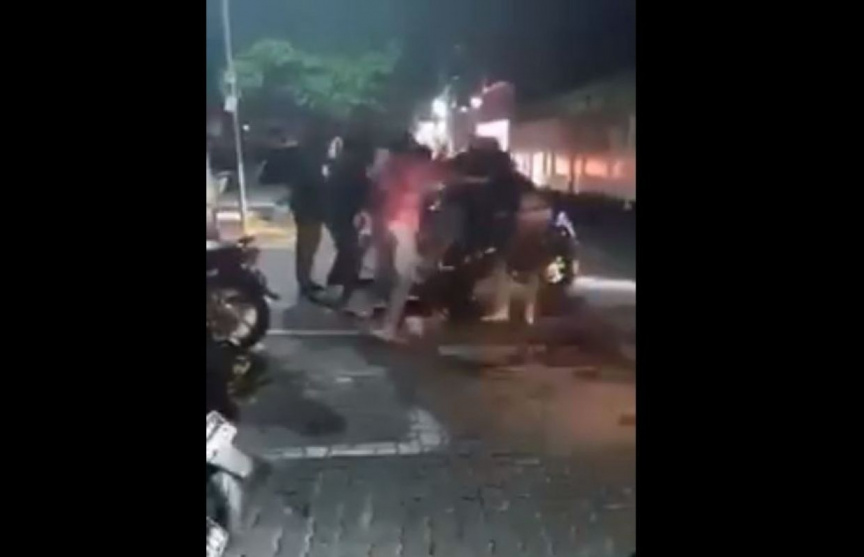 Screen grab from video footage of a case of gang violence in Male' City on January 9, 2020.

Six more men have been arrested for suspected involvement in a case of gang violence on a street in the capital, Male’ City.

The crime had taken place in front of the Foreign Ministry headquarters located on Boduthakurufaanu Magu on the night of January 9.

According to the police, the crime involved at least 10 attackers, who had set upon the victim - identified as a 19-year-old male.

A police spokesperson said on Tuesday that total eight suspects had been placed under arrest in connection to the case.

The first arrest in connection to the case, that of a suspect identified as a 22-year-old male, took place on January 10. The suspect was remanded to five days in jail by the Criminal Court.

The second arrest, that of a suspect identified as a 24-year-old male, took place on Monday, January 13. He has been remanded to 12 days in jail by the Criminal Court.

Six more suspects were arrested on Tuesday, bringing the total number of suspects in custody to eight.

Part of the attack was caught on video by a bystander and has gone viral over social media platforms. At the beginning of the 49-second video, a man is heard declaring the name of a local “gang” and calling for members associated with the “gang” to roam around somewhere else. It followed the sight of a young man – later identified by the police as a 19-year-old - being ganged up on by a group of men who beat him with their fists and kicked him. A motorcycle carrying two more men are seen deliberately ramming into the teen.

The attackers are seen dispersing with the arrival of a police officer. And the victim of the attack is seen pulling himself up off the ground and walking away.