Nasheed: Coalition to be blamed for lack of MDP's fair share 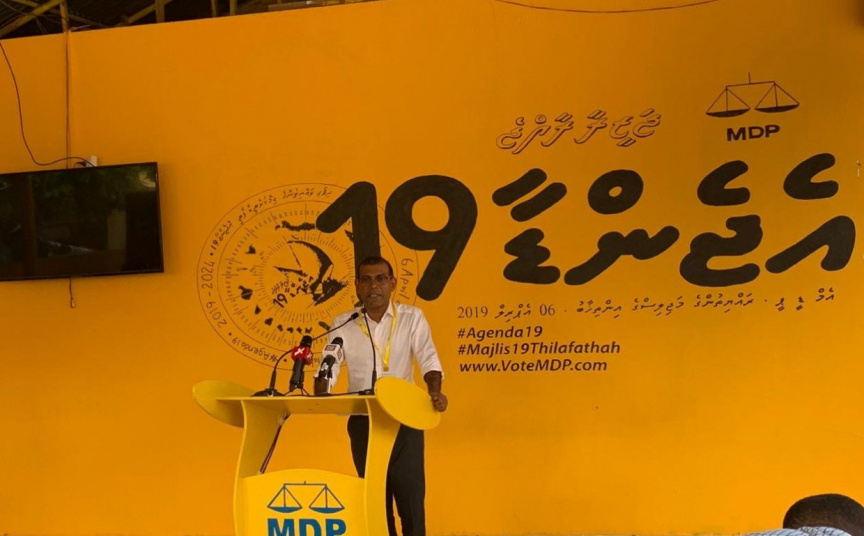 Speaker of Parliament Mohamed Nasheed speaking in H. A. Ihavandhoo as part of the campaign trip named “Agenda 19 Rashah” on January 13, 2020. (Photo/MDP)

Speaker of the Parliament Mohamed Nasheed has criticized the governing coalition by stating that MDP was not able to get its fair share due to the coalition parties.

Nasheed was speaking in H. A Ihavandhoo as part of the party campaign trip named “Agenda 19 Rashah” when he stated that MDP members were not getting the satisfaction of having an MDP government. He stated his belief that this was because of the coalition formed by the government.

“We can see, we can think, that after the government was formed, the MDP members in these islands are not getting the complete satisfaction. The satisfaction is not attained, the way I see it, the secret is, the coalition!”

“The members of this party, the people who worked for this party for all these years, they are not getting what they deserve, because that is allocated for others,” said Speaker Nasheed.

“That is how the government was formed, we came into this system with other political parties,” said Nasheed, who was the former President of the Maldives.

He stated that even though the people had voted for the government in the presidential election, that was not the case for the parliamentary elections.

“We competed in the parliamentary election alone. The result of that election entails clearly that Maldivians were calling for the Maldivian Democratic Party,” said Nasheed, who noted the resounding victory of 65 seats out of 87 that MDP won in the election. He noted that the seats lost were lost only by a small difference.

“The government should be formed on people’s ideas. An MDP government will be formed in this manner, the way I see it,” said Nasheed in a manner that indicated a lack of use for the governing coalition.

He then turned his attention to the previous administration of President Yameen and criticized that the administration had destroyed the decentralization system of the country. The powers of councils were restricted and made more dependent on the central government, according to Nasheed, who also stated that MDP was working to establish and enhance the decentralization system of the country.

“No one else can advocate for this. They don’t know. The projects to be run cannot be run by other parties with the government. They don’t have the mindset. That is not how the leaders of the parties intend to run their parties.” said Nasheed.

He then indicated the end of the coalition by stating that the council election would show whether the government would remain in the coalition system or as an MDP government.

“Whether under the leadership of the party presidential candidate Ibrahim Mohamed Solih, we surely only wish to do so as the majority of Maldivians wish,” said Nasheed.

Nasheed: Only MDP can run a decentralized Maldives