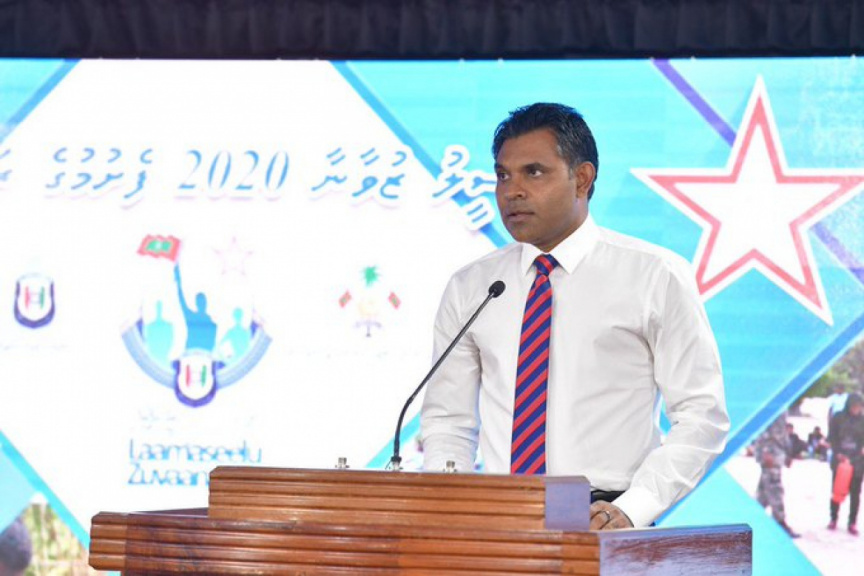 Vice President Faisal Naseem is pictured speaking at the inauguration of the “Laamaseelu Zuvaanaa” program held by Youth Ministry and Maldives Police Service on January 12, 2020. The Vice President called on youths to become more confident and courageous in his speech at the ceremony. (Photo/President's Office)

Vice President Faisal Naseem has called on youths to become more confident and courageous at a ceremony for the commencement of the “Laamaseelu Zuvaanaa” loosely translated as the exemplary youth, program held by Youth Ministry and Maldives Police Service.

The Vice president who was the chief guest at the ceremony stated that in order to become excellent, confidence and courage were a necessity.

“We must be assured of ourselves. Anyone can be an intelligent person. all that requires is courage. Today, the Maldivian youth needs to be courageous. We have to be intelligent and hardworking. We have to be disciplined.” said the Vice President.

The President noted the integral role youths play in developing a country.

“Without the work of a good generation of youths, no country has ever progressed.” said the Vice President.

The peace and stability of the country can only be shown through the shining examples set by youths, said the Vice President, who also noted that the government emphasized very much on developing youths. The Vice president then noted that some events occurred in the country that should not happen.

“We should accept these facts and face these challenges with determination and bravery,”

“The problem is that sometimes we become negligent, and the result is a sad one. No one would want things to go in an unhappy direction. But the lack of our concentration can turn things in a matter of seconds so that we  are faced with a lifetime of unhappiness.” said the Vice President.

The Vice President noted that the work of youths can bring advancements and stated that issues in every country are resolved with unity.

“No matter what we do, if we lose the time of our youth, it cannot be retrieved. It is a very valued time in our lives. So, all youths must be determined to become the person with the best demeanors and values.” said the Vice President.

Ending his speech, the Vice President stated that no success can be attained without good values and called to renew the spirit of unity and respecting others in all ages, especially during the age of youth.