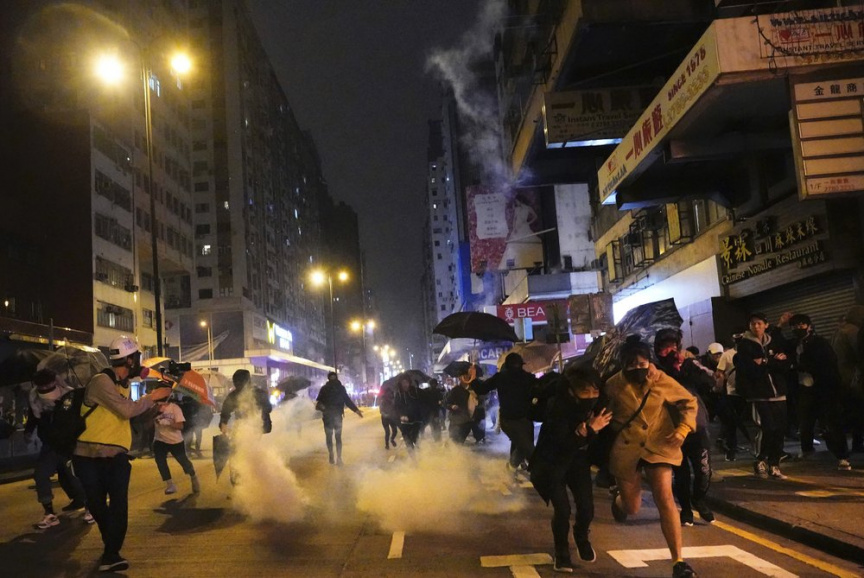 Protesters react as police fire tear gas during a demonstration in Hong Kong, early Wednesday, Jan. 1, 2020. Chinese President Xi Jinping in a New Year's address Tuesday has called for Hong Kong to return to stability following months of pro-democracy protests that began in June over a proposed extradition law, and have spread to include other grievances and demands for more democracy. (AP Photo/Vincent Yu)

The police actions were focused on the more industrial and working class districts on the city’s Kowloon side where protesters were watching a New Year’s light show. Afterward, protesters marched into a densely populated shopping district in a prelude to an annual pro-democracy march expected to be attended by tens or hundreds of thousands Wednesday afternoon.

The protests began in June over proposed legislation that could have allowed residents to be extradited to China where they could face possible torture and unfair trials. The legislation was withdrawn, but not before the protests expanded to wider calls for reforms in the semi-autonomous Chinese territory.

Hong Kong toned down its New Year’s celebrations amid the protests, which have dealt severe blows to the city’s retail, tourism and nightlife sectors.

Protesters also gathered at the Prince Edward subway station where police four months ago had rushed in, beating and tear gassing demonstrators who had no way to flee. That incident is among many cited by demonstrators as cases of police abuse for which no one has been held accountable.