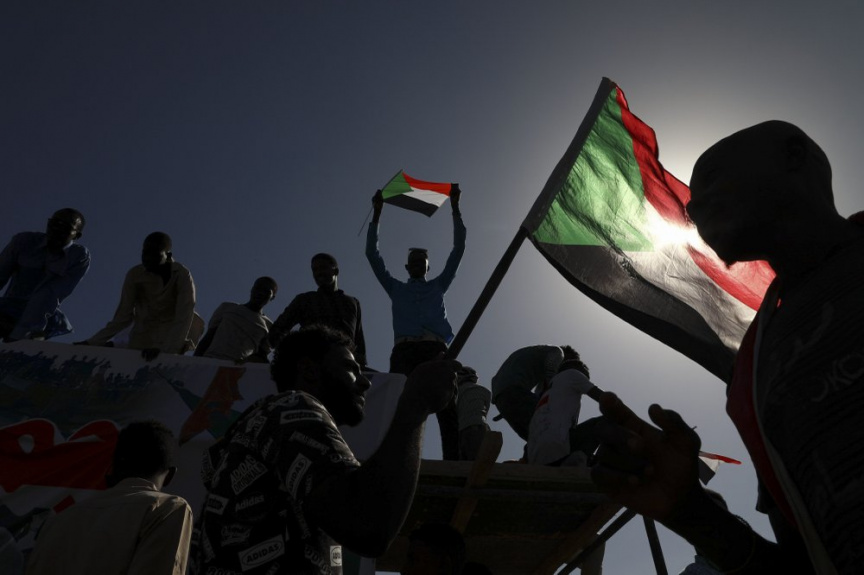 People gather as they celebrate first anniversary of mass protests that led to the ouster of former president and longtime autocrat Omar al-Bashir. in Khartoum, Sudan, Thursday, Nov. 19, 2019. (AP Photo)

CAIRO (AP) — A Sudanese court on Monday sentenced 27 members of the country’s security forces to death by hanging for torturing and killing a detained protester during the uprising against longtime autocrat Omar al-Bashir earlier this year.

The verdict, which can be appealed, was the first connected to the killing of more than 200 pro-democracy protesters since the demonstrations began last December.

“We are now sure our revolution is continuing on the right path,” said protester Amna Mohammed. She was among a cheering crowd of hundreds that gathered to welcome the verdict’s announcement outside the court in Omdurman, the capital Khartoum’s twin city.

The death of protester Ahmed al-Khair, a school teacher, while in detention in February was a key point — and a symbol — in the uprising that convulsed the large African country. That led, in April, to the toppling of al-Bashir, and ultimately to the creation of a joint military-civilian Sovereign Council that has committed to rebuilding the country and promises elections in three years.

The anniversary of the uprising this month drew teeming crowds to the streets in several cities and towns across the country, with people singing, dancing and carrying flags. A train packed with exuberant demonstrators, clapping and chanting, arrived in the northern city of Atbara, the birthplace of the uprising, from the capital city.

The Sudanese Professionals Association, an umbrella group of unions that led the protests against al-Bashir, welcomed Monday’s verdict. The group vowed to continue pursuing and bringing to justice security officials accused of torture.

Mohammed al-Feki Soliman, a member of the Sovereign Council, said the trial “renews the Sudanese people’s trust in their judicial institutions.”

Al-Khair was detained on Jan. 31 in his hometown of Kassala and was reported dead two days later. His body was taken to a local hospital where his family said it was covered in bruises. At the time, police denied any police wrongdoing and blamed his death on an “illness,” without providing any details.

Judge al-Sadik al-Amin al-Fek, however, said on Monday that the teacher was beaten and tortured while in detention. “His death was an inevitable consequence of the beating and torture,” he said.

The court also sentenced three other members of the security forces to three years each in prison, and acquitted seven suspects in the case. All the sentenced were policemen who were working in the jail where al-Khair was held or intelligence agents in the region.

Following a tradition based on Islamic law, or Sharia, the court gave al-Khair’s family the opportunity to “forgive” the suspects, which could have led to their pardon, but the offer was declined.

Taj al-Ser Ali al-Hebr, the country’s top prosecutor, welcomed the verdict as a “victory.” He called on the government to join the U.N. Convention Against Torture.

Earlier this month, a court in Khartoum convicted al-Bashir, who was jailed by the military after he was removed from power, of money laundering and corruption, and sentenced him to two years in a minimum security lockup. The image of the former dictator in a defendant’s cage on live TV sent a strong message for all of Sudan.

However, the deposed ruler is under indictment by the International Criminal Court on far more serious charges of war crimes and genocide linked to his brutal suppression of the insurgency in the western province of Darfur in the early 2000s. The military has refused to extradite him to stand trial in The Hague. Al-Bashir is now awaiting a separate trial, on charges of involvement in the killing of protesters in the months prior to his ouster.

Amnesty International and other rights groups have called on the new government to hold security forces accountable for killing scores of people in their efforts to stifle protests against military rule, especially those behind a deadly crackdown on a huge sit-in outside the military headquarters in Khartoum last June.

The government recently appointed independent judges to oversee investigations into the killings of protesters, a major achievement for the pro-democracy movement.

Sudan is under heavy international and regional pressure to reform. With the economy on the brink, the new government has made it a mission to get Sudan removed from the U.S. list of state sponsors of terrorism so that it can attract badly needed foreign aid.

The Sudanese government is expected to seek a bailout from the International Monetary Fund and the World Bank. That would require it to cut food and fuel subsidies and further devalue the local currency, said the IMF’s Daniel Kanda after a visit to Khartoum earlier this month.

But the government on Sunday passed the 2020 budget that dropped proposals to slash food and fuel subsidies.

The pro-democracy movement, the Forces for Declaration of Freedom and Change, fears that the austerity measures could led to a spike in the inflation rate which increased to 60% in November. The uprising began last December over soaring inflation and Sudan’s dire economic conditions.

In a separate development, tribal clashes erupted between Arabs and non-Arabs in the West Darfur province, killing “many” people and wounding dozens of others, the FDFC said in a statement.

Adam Regal, an activist in the area, said at least eight people were killed, some of whom were burned to death.

He accused the paramilitary Rapid Support Forces of intervening in the fighting on the side of Arab forces. Phone calls to a spokesman for the RSF seeking comment went unanswered.

Gen. Mohammed Hamdan Dagalo commands the paramilitary group. He is also deputy head of the Sovereign Council. Rights groups say his forces burned villages and raped and killed civilians during a series of counterinsurgency campaigns over the last decade.

Local authorities declared a nightly curfew across the province starting Monday till further notice. The government in Khartoum vowed it would also deploy more troops and police forces to help contain the violence.

The clashes overshadowed the peace negotiations between the government and rebels in South Sudan’s capital, Juba. Four Sudanese rebel groups suspended the talks, according to a joint statement from the groups.