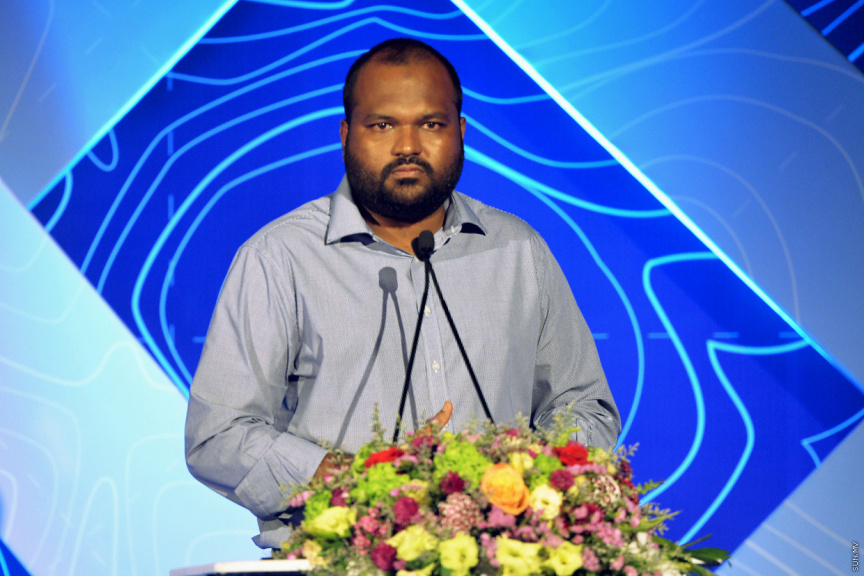 Tourism Minister Ali Waheed says the decision by President of Maldives Broadcasting Commission, Mariyam Waheeda (Mary), to serve as the hostess at Tourism Ministry’s function “Burabi” wasn’t a violation of the ethical code of conduct expected of members of independent institutions.

The decision by Mary to host the December 17 function to celebrate the accomplishments of the Tourism Ministry had sparked controversy, and led to the Chairperson of Parliament’s Independent Institutions Committee, Addu Meedhoo MP Rozaina Adam announcing her intention of initiating an inquiry into the incident once the Parliament reconvened after recess.

Tourism Minister Ali Waheed was pressed with questions over the incident during a press conference this Wednesday.

He responded that he had been personally unaware Mary had been hired to host “Burabi” until the function had begun.

Mary’s decision to host a government function had drawn the most scrutiny due to its similarity with when former BroadCom Vice President Fathmath Zaina was seen arranging chairs for a function organized by the President’s Office for senior citizens to meet then-President Abdulla Yameen Abdul Gayoom. Zaina had been dismissed by the Parliament citing her political bias in October.

Ali Waheed, however, dismissed the comparison as unfair.

He said that Mary was a well-respected professional, and that he had never seen her involved in a political event.

He said that he was saddened to consider the possibility that Mary – who was appointed to BroadCom this December – would need to step aside without being allowed the opportunity to serve Maldives in her appointed role.

“I have looked into what the ethical conduct code states. This does not violate it. In light of my knowledge of the law, and I have also served for five years at the Parliament, this is not a violation,” said Ali Waheed.

Ali Waheed said that while the act of a member of an independent institution hosting a government function didn’t constitute ethical misconduct, he still found it imperative to consider public opinion regarding the subject.

He said that if popular opinion leaned towards members of independent institutions hosting government functions as wrong, then the Parliament must establish it as such.

“The Parliament should establish it as such if they must be barred from a State function to announce policies. But then you will also need to clarify whether members of independent institutions, judges, and other such officials may be allowed to go to a gym, and whether they may be allowed at specific gyms. I want this to be made clear,” said Ali Waheed.

Another aspect of the decision to host “Burabi” which had drawn criticism had been the praises Mary had directed at several government officials.

Ali Waheed said that he did not wish to cause any harm to anyone through a function organized by the Tourism Ministry, and would therefore take back the words of praise if he could.

He said that the decision to hire Mary to host “Burabi” hadn’t been driven by any political intent, and that she hadn’t been instructed to praise the government or any government official.

Ali Waheed said that he had later reviewed the decision to hire Mary, including the payment process, and found that Mary had been offered payment for her services but had refused.

“This wasn’t done with any political intention. Neither will we [do something like this with a political intention]. Tourism Ministry, for certain, isn’t being run based on any specific political ideology. That we pre-planned this and asked her to praise the government... This isn’t how this happened. And neither did she come to arrange the chairs, I tell you,” said Ali Waheed.

He said that clarity regarding whether a member of an independent institution may or may not be allowed to host government functions was imperative, and that the Tourism Ministry would welcome any decision which shed clarity over the issue.

He said that the Tourism Ministry would no longer hire a member of an independent institution to host any of its functions until such time as the Parliament its decision.