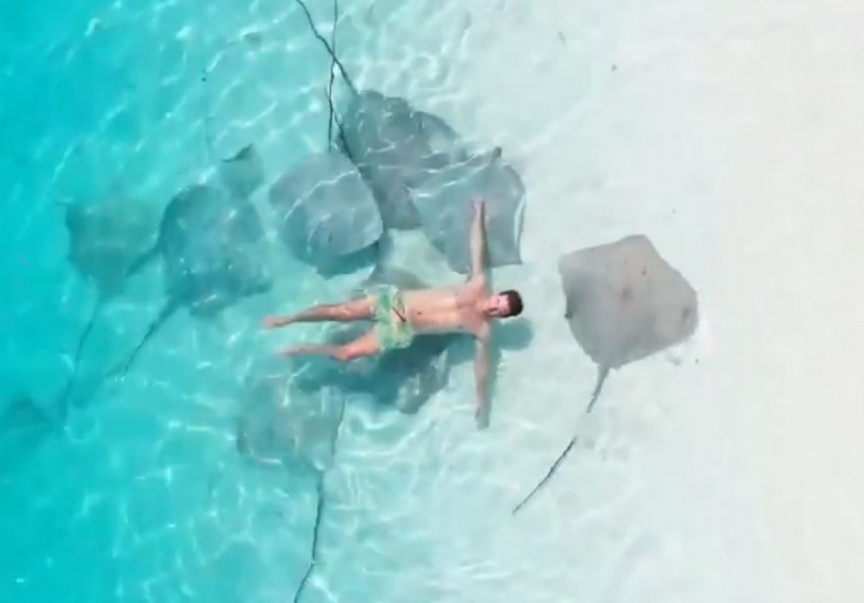 Photo is a screenshot of a video that shows a tourist floating with multiple stingrays on a beach in Maldives. The video went viral after it was shared and liked by thousands on social media.

A video of the Maldives has once again gone viral, this time with Stingrays.

The video which went viral after ABC aired it, shows a tourist lying on the waterline of a beach in the Maldives as several sting rays scurry underneath him. ABC did not state where the video, which has been shared and liked by thousands, was shot in the Maldives.

Some internet users were quick to comment on the dangers of this act and took the death of famous Australian TV personality Steve Irwin who died from being stung by a ray as the basis of their concern.

A man floats with stingrays off a beach in the Maldives. https://t.co/KnGYPOtkna pic.twitter.com/9HJ1AeBgCq

Irwin died at 44, after being pierced by a stingray barb while filming an underwater documentary titled Ocean's Deadliest. Previous cases of stingray injuries have also been reported in the Maldives.

Some users defended the breathtaking video and speculated that Irwin’s death was most likely due to too much contact or overplaying to which the rays responded to defend itself.

The video of Maldives does not show the tourist bothering the rays, and this meant that the perceived dangers of being stung in the video were relatively low, according to these users.

Stingrays are considered by most experts to be docile creatures, only attacking in self-defense. Most stingray-related injuries occur to the ankles and lower legs when someone accidentally steps on a ray buried in the sand.

Tourist dares to float on sea of sharks off Maldives. https://t.co/3It40RnDb6 pic.twitter.com/3XDLlkPxBw

Another video also aired by ABC on December 2, showed a tourist in the water calmly swimming with several sharks.