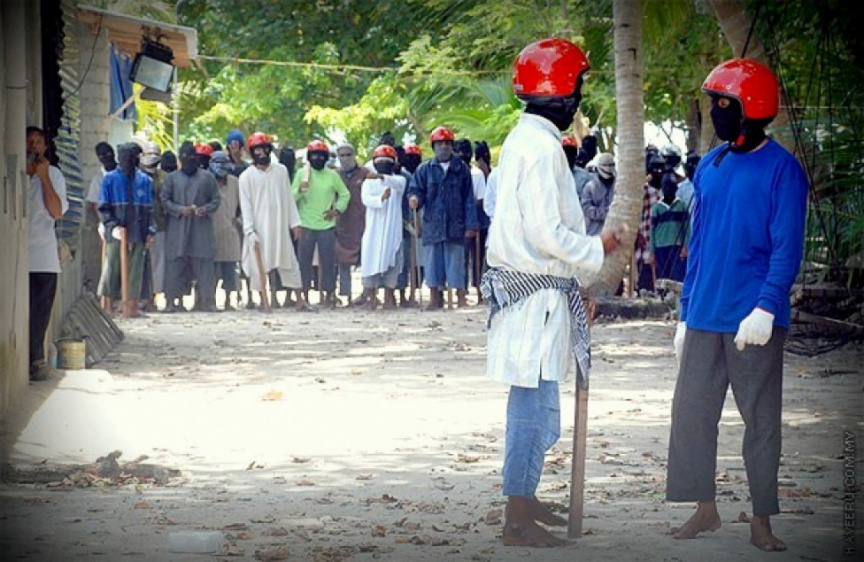 Photo shows the large group of rioters of extremist ideology who prayed separately in A.A Himandhoo in 2007, gathered near the "mosque" they used for prayers. Violent clashes erupted between the group, who wore helmets and used clubs and swords, and security personnel after the group attacked officers on October 7, 2007. The clashes injured several officers while one officer was taken hostage by the group before the violence was quelled by officers who arrested more than 50 people. (File Photo/Haveeru)

The Criminal Court has acquitted a man accused of terrorism during the violent clashes between religious extremists and security personnel in A. A Himandhoo in 2007.

The clashes which shocked the nation back then saw the arrest of 63 people. 53 of them were charged with terrorism while seven of them were also charged with rioting. Some of them were convicted while the Criminal Court yesterday acquitted the last man charged for the chaos in Himandhoo.

The Criminal Court yesterday ruled to acquit Ahmed Adam from Asurumaage, A. A Himandhoo, after finding insufficient evidence for the charges against him.

A summary of the charges

Police arrived on the island of A. A Himandhoo on October 9, 2007, after obtaining information about individuals who were connected to the bombing in Sultan Park a month before.

Police initially wanted to question these individuals as well as some others who had been accused of criminal activity and had been living in hiding in Himandhoo, according to the information received by the authorities.

The charges read that Ahmed Adam and a group of men attacked the authorities who conducting searches of the island.

Adam and the group men he was with used makeshift wooden clubs, sharpened metal poles, swords, acid and petrol to attack the officers before taking one of them as a hostage. The officer taken hostage was also beaten and mistreated by the men.

After being charged with terrorism for these above-mentioned deeds, Ahmed Adam pleaded not guilty to the charges and claimed that he had not gone to the area of the clashes on the day as a defense.

The state presented seven police officers as witnesses against Ahmed Adam. However, the officers stated in court that they were only aware of Ahmed Adam from the videos taken for the investigation.

The defense presented a single witness for Ahmed Adam who placed the accused in a different location. The witness stated that Ahmed Adam had been working on a boat with the witness up until the evening of that day.

These factors led the trial judge and senior judge of the Criminal Court Ali Rasheed to issue a verdict of not guilty.

The judge stated that the statements of the officers presented by the prosecution were not eyewitnesses, but relied on the video and photographic evidence of the investigation, which did not give much power for their statements.

The verdict was also influenced by the fact that Ahmed Adam did not go to the area of the violence on the day, which was evident from the statements of the defense witness, according to the Judge.