Speaker Nasheed and MPs enjoying India with ‘’Chai’’ and treats 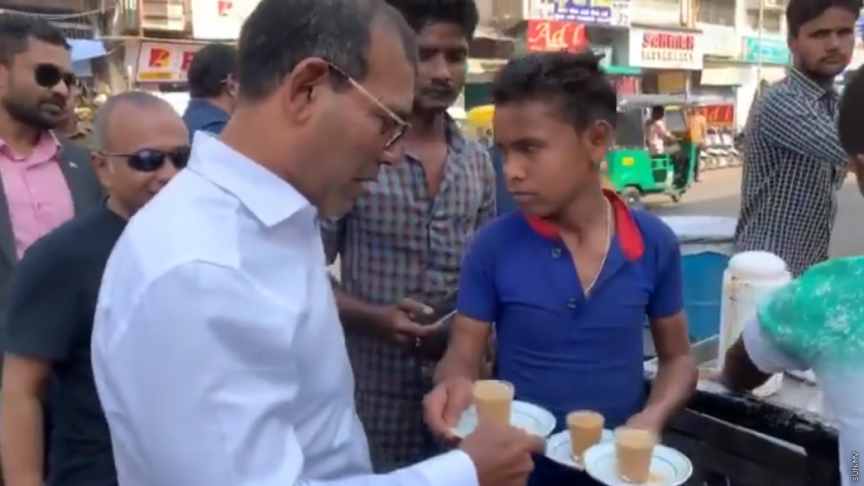 Speaker Nasheed being served tea in New Delhi, India. The Speaker and several MPs visited India as part of an official trip on December 8, 2019.

Speaker Nasheed and the delegation of Maldivian MPs visiting India spent a day in the bazaars of Indian capital New Delhi, experiencing the local culture and sipping “chais”.

A video tweeted by MDP PG leader Ali Azim shows MPs enjoying the bazaars of New Delhi during tea time. Speaker Nasheed can be heard in the video speaking about enjoying tea with MPs after returning from the mosque.

“I am getting ready to have a cup of tea. The cups have been cleanly washed and w2e are waiting until the tea is cooked,” says Speaker Nasheed.

The video then shows MPs being served hot tea.

MP Ilyas Labeeb also tweeted a video of the experience captioned “tasty chai”. Sharing stories from their city tour of Delhi, MP Ilyas then tweeted that after tea, MPs tasted “Paan”, and Indian after-dinner treat that consists of betel leaves filled with chopped betel nuts and slaked lime, to which assorted other ingredients such as red Katha paste are added.

The MPs on holiday are in India for an official trip. The delegation has also met with the lower house of Indian Parliament Lok Sabha and signed an MoU with the Indian parliament, before visiting important landmarks in the capital of India.