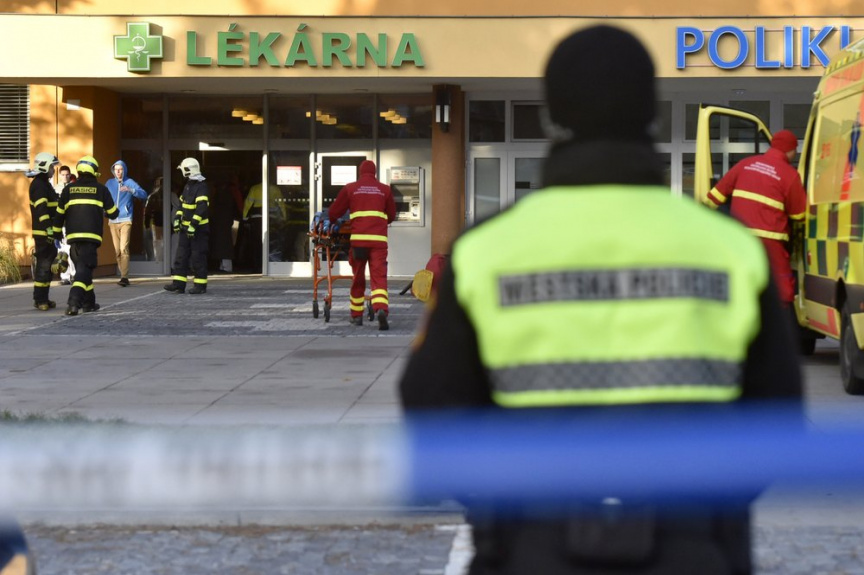 Firefighters, police officers and paramedics in front of the Ostrava Teaching Hospital, after a shooting incident in Ostava, Czech Republic, Tuesday, Dec. 10, 2019. Police and officials say at least four people have been killed in a shooting in a hospital in the eastern Czech Republic. Two others are seriously injured. (Jaroslav Ozana/CTK via AP)

PRAGUE (AP) — A man with an illegal gun fatally shot six people and wounded three others at a hospital in the eastern Czech Republic on Tuesday, the prime minister and officials said. The gunman later killed himself as police approached his car.

The prime minister canceled an official visit to Estonia and headed to the scene of the shooting at the University hospital in the eastern city of Ostrava, 350 kilometers (220 miles) east of Prague.

He said the suspect had been treated in the hospital, but didn’t offer details.

“Nobody understands why the attacker was so ruthless,” Babis said.

“I’d like to assure the public that there’s no danger anymore,” Hamacek said.

Police published a photo of the suspect, having withdrawn an earlier photo of a different man. They said that man was now considered to be a witness.

Clinic director Jiri Havrlant told media the dead were four men and two women. Another man and a woman had to be operated on, while one person had less serious wounds.

All the victims were adult patients waiting for treatment.

The nation will honour them with sirens wailing all across the country on Dec. 17, Babis said.

It was the second-largest number of Czechs ever killed in a mass shooting after a man opened fire during lunchtime in southeastern town of Uhersky Brod, killing eight before he fatally shot himself in 2015.

Death toll in Czech mine explosion increases to 13