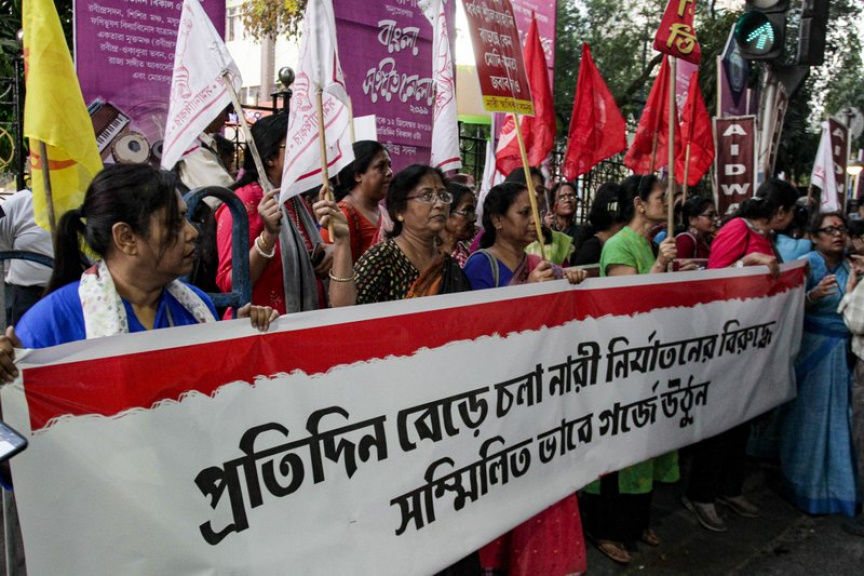 Activists demanding justice in the case of a veterinarian who was gang-raped and killed last week shout slogans during a protest in Kolkata, India, Thursday, Dec. 5, 2019. According to the most recent available official crime records, police registered 33,658 cases of rape in India in 2017 - an average of more than 90 every day. But the real figure is believed to be far higher as many women in India don’t report cases to police due to fear. Banner reads, "Protest against regular incidents of violence on women". (AP Photo/Bikas Das)

The men were killed around 3:30 a.m., according to Priya, a police sub-inspector in Hyderabad who goes by one name.

Another police official said the suspects tried to grab an officer’s firearm and escape during a visit to the crime scene. That officer spoke on condition of anonymity as he was not authorized to speak to the media.

The suspects were taken to reconstruct the crime scene, the rape as well as the spot where she was burned about half a kilometer away, according to Shreedharan, an official in the police commissioner’s office. He also uses one name.

The burned body of a 27-year-old woman was found last week by a passer-by in an underpass in Hyderabad after she went missing the previous night.

The high-profile case has sparked protests across India.