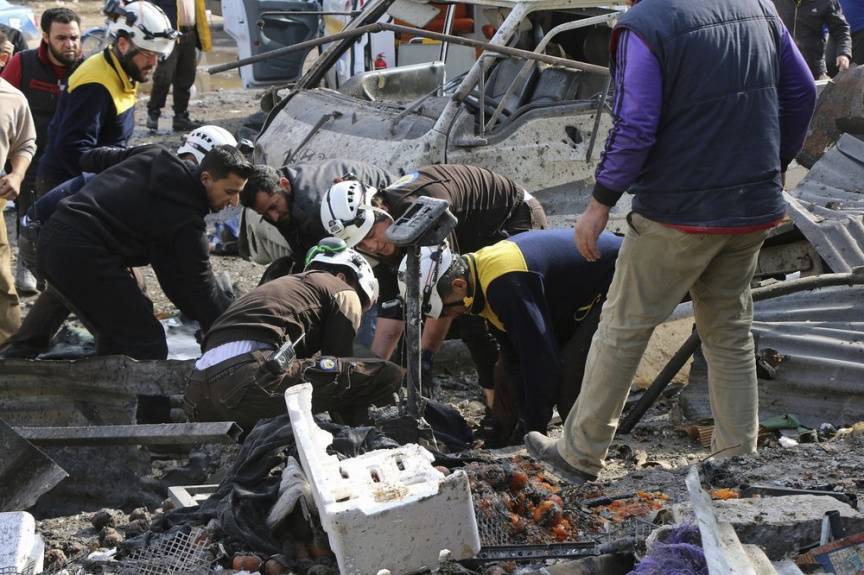 BEIRUT (AP) — A suspected Syrian government airstrike on a market in a northwestern rebel-held town killed 13 civilians on Monday while Turkish artillery shells landed near a school in a Kurdish-held town, killing at least nine, including eight children, activists said.

The violence is part of rising tension in Syria’s north, along the border with Turkey. Syrian government troops have renewed their push to reclaim the last opposition stronghold in Idlib province while Turkey, which sees Syrian Kurdish fighters as an existential threat, has been widening its military operations there to push them away from its borders.

The Britain-based Syrian Observatory for Human Rights said the airstrike hit a popular market in the rebel-held town of Maaret al-Numan, killing 13 civilians and wounding 18. The opposition-run Aleppo Media Center also put the death toll at 13 while the Syrian Civil Defense, a team of first responders known as White Helmets, said nine civilians, including two women, were killed.

Different casualty tolls are common in the chaos of the civil war. Over the weekend, fighting between Syrian government forces troops and insurgents in Idlib — the last opposition stronghold — killed dozens on both sides.

“The bombardment of the market that was packed with civilians led to a massacre and wide destruction,” the Civil Defense said on its Facebook page, which also had photos of lifeless bodies and paramedics helping the victims.

The Observatory and the Civil Defense reported another airstrike, on the nearby town of Saraqeb, saying it killed and wounded several people. The Observatory also reported there was a Russian airstrike on and around the central prison in the city of Idlib amid reports from other activist groups that some inmates had managed to escape.

Syrian troops launched a four-month offensive earlier this year on Idlib, which is dominated by al-Qaida-linked militants. The government offensive forced hundreds of thousands of civilians to flee their homes.

A fragile cease-fire halted the government advance in late August but has been repeatedly violated in recent weeks.

Meanwhile, the Observatory and the Kurdish news agency Hawar said Turkish shells landed in the town of Tal Rifaat, to the north in Aleppo province, near a school. The Observatory said nine people were killed, while Hawar put the death toll at 10. Both said eight children were killed in the shelling.

The Kurdish-held town is squeezed between Syrian government areas and territory controlled by Turkey-backed fighters. There is a Russian military observation point in the town, which is also home to Kurdish people displaced when Turkey and its allies seized it in March 2018.

Separately, three Russian military police officers were wounded in a blast in northern Syria on Monday, Russia’s Defense Ministry said. The explosion occurred in the border region of Kobani, where Russian and Turkish forces have been conducting joint border patrols since last month.

In October, Russia and Turkey struck a deal in which Syrian Kurdish fighters would pull out of the frontier region as Turkey launched a new invasion into northeast Syria. Ankara and Moscow agreed to conduct joint patrols up to 10 kilometers (6 miles) from the border in the west and east of areas seized by Turkey earlier that month.

The officers were exploring new patrol routes in an armored car when an improvised explosive device exploded, the ministry said.