MNDF: Threat to ‘’blow up’’ HQ under investigation 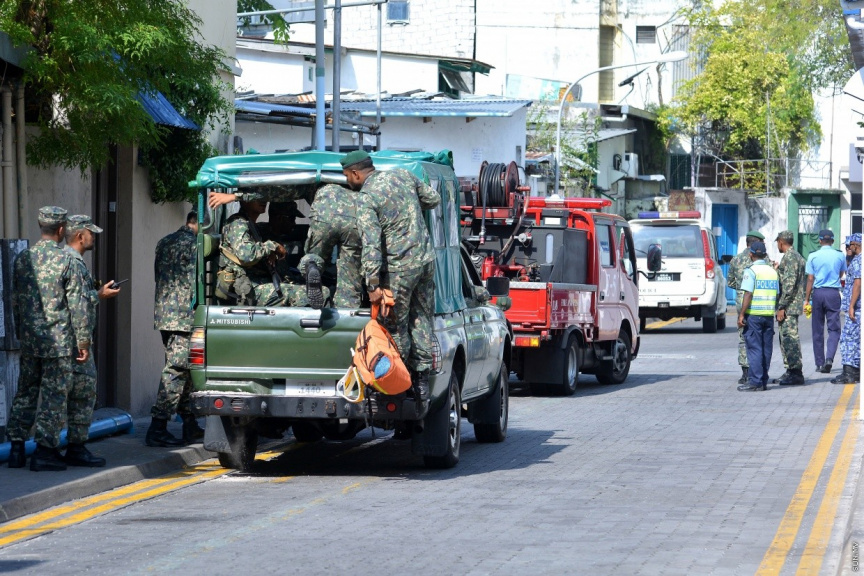 MNDF personnel and Police officers near Muliyaage after unconfirmed reports were received of an explosive device discovered in the location. (Sun Photo/Ahmed Sharuvan)

Maldives National Defense Force has confirmed that it is investigating a case with the Police regarding a man who threatened to blow up the Bandaarakoshi which is the main headquarters of MNDF.

A trusted source had informed “Sun” that the incident occurred around two weeks ago when a small van entered the military headquarters without authorization. The van which entered the base through the main gate after an MNDF vehicle was passing through and was perceived as just another military vehicle by the officers on duty.

MNDF confirmed that a van registered under a “C “ board had entered the military HQ around 21:00 on November 18, 2019. The van was being driven by a migrant who was alone inside the vehicle, according to MNDF.

MNDF also called on the public to report any suspicious activities without delay.

Despite his thinly veiled threat, soldiers did not find any such material from the pickup he was driving in, but the incident prompted MNDF to raise the alert levels to an emergency level.