Malta leader to resign amid protests over reporter’s death 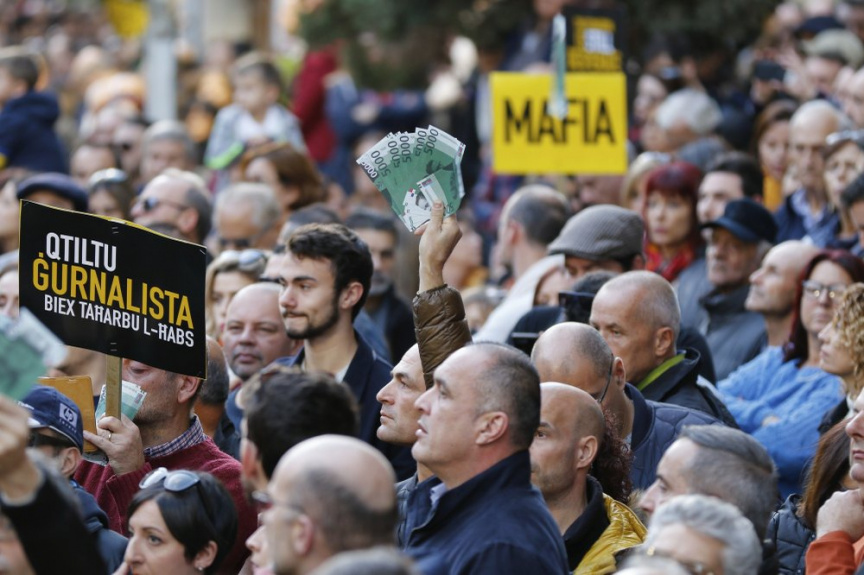 People stage a protest in La Valletta, Malta, Sunday, Dec. 1, 2019. Malta's embattled prime minister has received a pledge of confidence from Labor Party lawmakers amid demands for his resignation by citizens angry over alleged links of his former top aide to the car bomb killing of a Maltese anti-corruption journalist. Hours later, thousands of Maltese protested outside a courthouse demanding that Joseph Muscat step down. (AP Photo)

VALLETTA, Malta (AP) — Maltese Prime Minister Joseph Muscat told the nation Sunday night that he would resign in January, following pressure from angry citizens for the truth about the 2017 car bombing that killed an anti-corruption journalist.

In a televised message, Muscat said he had informed Malta’s president that he will quit as leader of the governing Labor Party on Jan. 12 and that “in the days after I will resign as prime minister.”

Hours earlier, nearly 20,000 Maltese protested outside a courthouse in the capital, Valletta, demanding that he step down in the largest such turnout of nearly daily protests in recent weeks.

“As prime minister, I promised two years ago that justice would be done in the case of the murder of Daphne Caruana Galizia,” Muscat said, beginning his speech, adding that “today I am here to tell you that I kept my word.”

But the slain reporter’s family contended Muscat’s departure won’t satisfy those in the nation who are determined that corruption and cronyism between politicians and business figures be rooted out.

“People will be out in the streets again tomorrow,” tweeted one of her sons, Matthew Caruana Galizia, who is also a journalist.

Muscat contended that “justice is being done.”

He noted that in addition to three people arrested soon after the bombing for carrying out the actual attack, now there is “someone accused of being the principal person behind this killing.”

Muscat was referring to prominent Maltese businessman Yorgen Fenech, who on Saturday night, was arraigned on charges of alleged complicity in the killing and of allegedly organizing and financing the bombing. Fenech entered pleas of innocence.

Muscat’s former chief of staff Keith Schembri was allegedly linked to the killing. Schembri was among government members targeted by Caruana Galizia’s investigative reporting. Schembri, who resigned last week, was arrested in the probe but later released. He denies wrongdoing.

The slain reporter had written extensively about suspected corruption in political and business circles on the European Union nation, an attractive financial haven for many investors.

Among her targets were those in Muscat’s political inner circle, including those in his Cabinet. Caruana Galizia was the subject of lawsuits by some of her subjects, including in government. While many celebrated her as an anti-corruption champion, some on the island whose dealings she exposed scorned her work.

“I reiterate my deepest regret that a person, who, with all her positive and negative qualities and contribution toward the democracy of our country, was killed in such a brutal way,’’ Muscat said.

“The sensations of genuine sadness and anger for this murder are justified. And I will never accept that someone conveys a signal that in any way he or she is justifying this murder,” the prime minister said.

Muscat used his speech to praise his tenure’s achievements, including strong economic growth and civil rights, including legalized marriage and adoption for same-sex couples.

Referring to the reporter’s slaying, the prime minister said, “This case cannot define everything that our country is and what we have accomplished together.”

The political opposition seized on the resentment toward the government tangible in the protests.

“Muscat does not understand the anger of the people,” said Adrian Delia, leader of the opposition Nationalist Party. Nor does he understand “political responsibility,’’ Delia contended.

“He did not understand that Daphne Caruana Galizia’s murder took place because of the sluggishness of our institutions,’’ Delia said after Muscat’s speech.

European Parliament lawmakers are due to visit Malta in coming days, amid concerns about the functioning of rule of law on the Mediterranean island nation.

Muscat struck a defensive note, saying, “Our institutions are strong, and they function.”

Labor has a comfortable majority in Parliament, indicating that a new party leader could become premier without the need for a national election. That could thwart the opposition conservative party’s hopes to rule the nation.

Muscat, first elected as prime minister in 2013, is serving his second term.

Fenech had requested immunity from prosecution promising to reveal information about government officials. His bid for immunity was rejected first by Muscat on his own and later by Muscat’s Cabinet.

Participants in Sunday’s protest carried photos of the slain journalist as well as placards with the last words she wrote on her blog shortly before getting into her car, which was blown up near her home. “The situation is desperate,″ she had written referring to what she unearthed with her digging into suspected widespread corruption in Malta’s political and business circles. On the placards, protesters added the word “still” before ″desperate.”

Affixed to the courthouse gates were copies of a photo of Schembri posing the alleged middleman was unclear where and when the photo was taken.

The alleged go-between, Melvin Theuma recently was granted immunity from the prosecution in exchange for giving details on who was behind the bombing.

Also angering Muscat’s opponents was the reinstatement on Sunday of Chris Cardona as economy minister. Cardona had suspended himself last week after being questioned by the police investigating the murder. Like Schembri, Cardona has always insisted he is extraneous to the case.

Fishermen: Give hope with action, not words