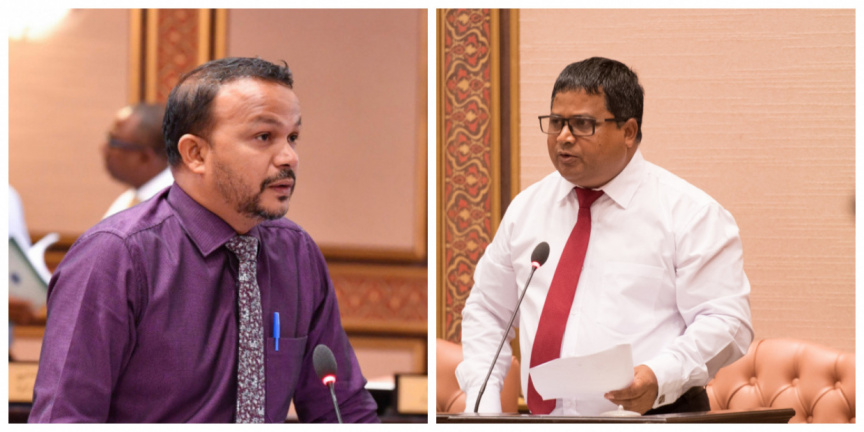 Environment Minister Hussain Rasheed (R), Kamadhoo MP Ali Hussain (L). The MP failed to be present in the Parliament to question the Minister on November 27, 2019.

The absence of Kendhoo MP Ali Hussain in today’s parliamentary session has resulted in the cancellation of the time designated to question the Environment Minister Hussain Rasheed.

It was Kendhoo MP Ali Hussain who proposed questioning the minister over the schedule of the water and sewerage projects planned in Kendhoo, Dharavandhoo, and Kamadhoo in B. Atoll.

Ministers can be questioned by MPs in the Parliament after sending a written notice of 14 days accompanied by the questions to the minister. Today’s session saw Environment Minister Hussain Rasheed present at the session when it began, however, MP Ali Hussain was not present.

This resulted in the Speaker of the Parliament Mohamed Nasheed requesting the Sergeant-at-arms to locate the MP. Speaker Nasheed also attempted to allow other MPs to question the Minister but later stated that the Parliament regulations did not allow him to do so, as he was informed by the Secretary-General.

“The Secretary-General has informed that it cannot be done in this manner,” said Nasheed, who noted that the MPs absence has seen him lose a golden opportunity to provide the public and the parliament with important information. He also delayed the session to see if MP Ali Hussain attended the Parliament late.

However, the failure by the MP to materialize after this delay saw the Minister leave the session resulting in the first time a ministerial question time was canceled due to the absence of an MP in the 19th parliament.

Nasheed: I do not wish to see Salaf banned